Sr. Charlotte was born in La Crosse, KS, on March 31, 1931, one of the ten children of Lidwina Zimmerman and Carl Unrein. She entered the Dominican Sisters Community in 1945 and pronounced vows in 1948. She celebrated seventy years of religious profession in 2018.

Being just fourteen when she entered religious life, Sister Charlotte began her ministry doing domestic work at the Motherhouse and area convents.

At the age of twenty-five, Sr. Charlotte was sent to Gusau, Nigeria, to help start a mission. Once there, she joined her Sisters as they taught religion and established a dispensary and hospital. She ministered there for five years, leaving, as so many religious did, as the nation’s revolution began.

Upon returning to Great Bend, Sr. Charlotte was put in charge of the sewing room. Rather than finding this a mundane task after her years in Africa, Sr. Charlotte considered this new ministry an adventure, where she could update the traditional habits to fit the spirit of Vatican IL

At forty, Sister Charlotte earned an Associate Degree in Nursing from Barton County Community College. She used this new knowledge to serve at  Saint Catherine Hospital and, later, as a surgical counselor and circulator for Fry Eye Associates, and later as a home health nurse.

After her retirement from outside ministry, Sr. Charlotte was a fixture at the Great Bend Motherhouse, where she tended her roses, made jams, jellies and crafts for the annual bazaar, helped create a welcoming Chapel environment, and welcomed Motherhouse guests.

Sister Charlotte was preceded in death by her parents, four sisters, including her older sister, Sr. Eleanor Unrein, and four brothers. She is survived by one brother, Timothy Unrein, Ocala, FL; several nieces and nephews; as well as the community of the Dominican Sisters of Peace.

A Vigil Service was held on September 26, and the Mass of Christian Burial on September 27, 2021. Sr. Charlotte was buried the Sisters’ Resurrection Cemetery.

Memorial gifts in Sr. Charlotte Unrein’s memory may be also be sent to the Dominican Sisters of Peace, Office of Mission Advancement, 2320 Airport Dr, Columbus, OH 43219

She was born in 1930 in Gueydan, LA, to Sylvania Vincent and Reno Petry.  At just 14, she began thinking about sharing her life “more fully and deeply with others.” She made that plan real when she entered the Congregation in 1947, made First Profession in 1950, and took her final vows in 1953.

Her desire to share her life with others was fulfilled through her varied ministries. She served as a Montessori teacher at a Child Development Center, a grief counselor, a home visitor, a hospital chaplain and in the Office of Religious Education for both the Diocese of Lafayette and the Archdiocese of New Orleans. Sister Louella also served the congregation as Archivist.

Sister Louella ministered at St. Maria Goretti Parish for more than 20 years. After the destruction of Hurricane Katrina in 2005, she and several Adrian Dominicans visited every home and connected the residents with local agencies that could meet their needs.

Sister Louella retired from active ministry in 2008, ministering as a volunteer with the elderly in Metairie, LA.  She entered a ministry of prayer and presence in the Columbus Motherhouse in 2010, where one of her most cherished traditions was ministering in song to those making their final passage home to God.  She moved to the Mohun Care Center in Columbus, OH, in 2019, offering prayer and companionship to her Sisters until her own death.

She was preceded in death by her parents, Reno and Sylvania Vincent Petry, her brothers, Melvin, Milton, Erwin, and Paul, and her sisters, Velma Lemaire and Evelyn Goller.  She is survived by nieces and nephews.

A private Funeral Service was held on September 17, 2021, at the Dominican Sisters of Peace Motherhouse Chapel.  Burial will take place later at Gueydan Cemetery, Gueydan, LA by Egan-Ryan and Vincent Funeral Homes.

Sister Mary Ann was born into her family of six siblings in 1929. Mary Boruch and Michael Fedor raised their family in Windber, PA.

Sr. Mary Ann worked as a clerk and window trimmer before entering the community in 1951. She made First Profession in 1954 and took her final vows in 1957.

She put her education to work serving as an educator, administrator, and bursar in schools in Michigan and Pennsylvania. Sister Mary Ann had a reputation as an excellent teacher among her many students from primary school to college level.

Sr. Mary Ann served as Vice-President and President of our founding Congregation in Oxford, MI.  She also served as the Oxford Motherhouse treasurer after our new congregation was formed, and she coordinated retreats at Dominican Center, a meeting place for youth.

Sr. Mary Ann began her final ministry of prayer and presence at the Mohun Health Care Center in Columbus, OH in 2013.

Sister Mary Ann was preceded in death by her parents Michael and Mary Boruch Fedor, her sisters Irene Hordubay and Mary Miller, and her brother, Michael Fedor. She is survived by her sisters, Anne Clark and Kathy Wise.

A private Memorial Service was held on September 3 at the Dominican Sisters of Peace Motherhouse Chapel.

Burial will take place later at Our Lady of Sorrows Cemetery, Oxford, MI, by Egan-Ryan and Modetz Funeral Homes.

Memorial gifts in Sr. Mary Ann’s memory may be sent to the Dominican Sisters of Peace, Office of Mission Advancement, 2320 Airport Dr., Columbus, OH 43219 or submitted securely at www.oppeace.org.

What is it like to live and be pastorally present in a border state such as Arizona?

As Sisters who live in the Mission Diocese of Tucson, we share a southern border with Mexico, an eastern border with New Mexico that also borders Mexico and Texas. We have a western border with California that borders Mexico. In addition to these borders of states and countries, we in Arizona have borders within our state. The Sovereign Nations of the indigenous Native American people recognize borders that we frequently cross without notice or awareness as we travel the US Highways to and from our destinations. Sometimes we see road signs that advise we are “Now Entering the Native American Nation” and leaving it as we drive along the highways.

As a native of Arizona, meeting and greeting travelers from various points of origins we, as family and communities of faith within this border context, saw each traveler as a gift and treasure to receive with gratitude and welcomed them to extend our desert hospitality.

Border crossing was a given reality and as we crossed from “our familiar boundaries” into other boundaries. We noticed how the landscape, plant life, and horizons had a particular beauty and unique challenges that could be dangerous to the unfamiliar traveler.  Only the experienced amongst us could tell us stories of past journeys that held us in breathless suspense as the story unfolded. Stories that made known the hidden dangers, the mercy and kindness of strangers, the burning heat of full sun, and the occasional breeze that cooled the body at a most critical time.  We learned to read the landscape, look for animal trails and identify plants and cacti that were edible. We learned that there are cacti to avoid, such as the Cholla that releases its spiny sharp needles to anything that moved close by because it was drawn to the magnetic pull of the person or animal. The desert can be hostile to the newcomer and indeed it is deadly to the inexperienced.

This cultural and local knowledge carries with it a deep appreciation of hospitality, such as the rancher who leaves water out under mesquite trees for the humanity of migrant immigrants, desperate to leave the unknown dangers in their land to take a faith risk in God’s providence and mercy of strangers.

We give thanks for the many volunteers who make rescue searches in the desert to save lives. When they find the lost, the dying, and the remains, they too will pray in gratitude for this Mission of God that tugs at their heart and their humanity to reach out as believers that everyone is a son and daughter of God, therefore their brothers and sisters in the Name of God.

We give thanks for the partnerships of non-profits with Border Patrol to rescue the lost and receive the remains of the many women, children, and men whose families need to know what happened to their loved ones.

We give thanks for the forensic teams that reverently receive the remains and work with the Consulates to identify the dead.

We give thanks to the volunteers who go out into the desert to place a cross at the site of the now documented dead with their names on their cross that has been blessed and photos taken to send to their loved ones in their country of origin.

We give thanks to you for your prayers, your advocacy on behalf of the poor whose voice was heard by our Merciful God.

Let us pray for all immigrant migrants as a people of Faith, itinerant preachers on the Emmaus Roads of humanity’s desert. Let us light a candle in remembrance and open wide our hearts, minds, hands and

Walk as St. Dominic did and travel the road of mercy and Eucharistic hospitality to be and become the Bread of Life and Cup of Joy.

Today’s feast is about three archangels – Michael, Gabriel and Raphael – who the church calls saints.

Michael means “who is like God” and this angel is seen as a protector. Michael is named in the Book of Revelation. Here Michael defeats Satan with the other fallen angels. We often think of Michael as fighting the devil and winning.

Gabriel means “hero of God” and this angel is known as one who announces. We usually associate Gabriel as the angel who appeared to Mary and to Zechariah foretelling the births of John the Baptist and Jesus.

Raphael means “God has healed” and this angel is depicted as a guide. In the Book of Tobit Raphael is the guide on Tobias’ journey and eventually instructs Tobias what to do to heal Tobit’s blindness.

Which of these appeals or touches you in your life? Which angel should we call upon to guide us in our world today? I propose all three. 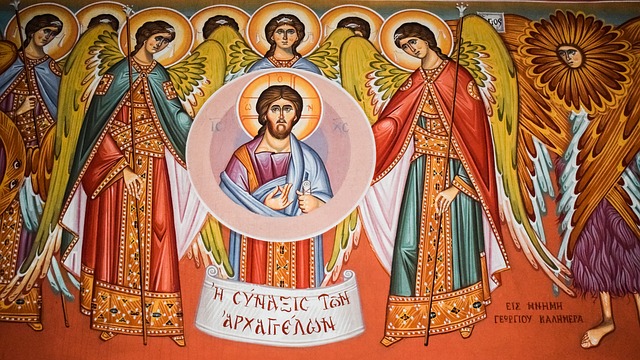 Raphael is needed in our world to help us heal the ills we confront daily. Yes, we need to heal the physical disease of the Covid virus. There are also so many other ills in our world, – racism, discrimination, care for the poor and so many other evils.

We can use the good news that Gabriel can announce. We certainly can use some good news today. Sometimes the good news can seem perplexing like the way Mary felt as a young unmarried pregnant teen. Like Mary it takes courage to be faithful and trusting in the Word, the good news, that God sends us.

Michael is the least attractive to me. It makes me think of war and violence. Yet we do need to wage war against the violence in our cities and towns. Sometimes waging war can happen by standing tall for peace; other times it can mean to step out of the crowd to confront the situation right in front of us.

The gospel for the feast of the Angels is about the call of Nathanael. Jesus tells Nathanael: “Amen, amen, I say to you, you will see heaven opened and the angels of God ascending and descending on the Son of Man”. May we call upon God to send Raphael, Gabriel, and Michael to our world to help us find ways to bring about more peaceful, life-giving good news to heal our bodies, spirits, and our earth.