SPEAK UP FOR JUSTICE
Ban Arm Braces for Guns
In June, the federal Bureau of Alcohol, Tobacco, Firearms and Explosives (ATF) proposed a new rule that would specify the definition of “rifle” to include certain pistols equipped with arm braces that can be fired from a shoulder.  Much like with bump stocks, the gun industry has exploited a loophole to intentionally evade the law in order to make and market particularly dangerous short-barreled rifles. Some arm braces allow a user to turn a pistol into a short-barreled rifle — one of the most highly regulated weapons in the country due to its combination of lethality and concealability. This is the type of weapon used in the deadly Dayton shooting that took place in 2019.

Now, the ATF is asking for the public to weigh in on a proposed rule that will help close this dangerous loophole. Click here to give your thoughts.

Support the Clean Cars Rule
Transportation is the #1 source of carbon pollution in the United States. That means the most important climate change policy we have on the books is vehicle fuel efficiency, or the Clean Cars Rule.
We have a chance to weigh in on the strength of the new clean car rule right now. This is a critical time for people of faith and conscience to make their voices heard in support of the cleanest car standards possible.
Click here to send a comment to the EPA in support of the Clean Cars rule.

Support Workers
As corporations have seized the pandemic as an opportunity to make more money, working families have continued to suffer. With 16-hour days a regular occurrence, workers at Nabisco are all too familiar with this dynamic. After cutting pensions back in 2018 and closing 2 U.S. facilities earlier this year, Nabisco-parent Mondelez has begun contract negotiations this summer with a proposal that includes lower-quality healthcare plans and alternate work schedules of 12-hour days. This offer is insulting to workers, who over 2020 helped Nabisco increase revenue by $26.8 billion.
Our food production laborers have carried us through a global pandemic. Tell Nabisco and Mondelez International that you side with the union, and keep Nabisco facilities in the U.S.
Sign the petition to Nabisco: No contracts, no snacks.

EVENTS
Celebrating the Season of Creation
The Laudato Si Movement have produced videos, stories, news releases, social media kits, and other tools to help to bring to life the Season of Creation. You can celebrate by using the valuable and helpful material included on this drive. Click here to review.

LEARNING
The National Catholic Reporter’s Earth Beat column features reporting from Marianne Comfort, a justice coordinator with the Sisters of Mercy of the Americas. Click here to read her article on protesting Line 3 in Northern Minnesota.

For nearly 50 years, the Catholic Church in the United States has celebrated National Migration Week, which is an opportunity for us to reflect on the circumstances confronting migrants, which includes immigrants, refugees, children, victims and also survivors of human trafficking.

This year National Migration Week takes place between September 20-26.  The primary theme for this year is “TOWARDS AN EVER WIDER ‘WE’.”  In Pope Francis’ letter announcing this year’s theme, he emphasizes that this focus calls on us to ensure that we will no longer think in terms of ‘them’ and ‘those,’ but only ‘us’.  Pope Francis invites us to be part of a culture of encounter as we welcome, protect, integrate, and promote immigrants and refugees in our midst. 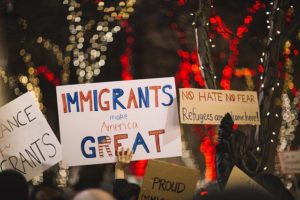 Immigration is about real people who are trying to find a better life and a new beginning.  It is about more than statistics.    As Pope Francis stated, “Each migrant has a name, a face and a story.” Immigrants who come to the United States, and particularly those who are undocumented, are an especially vulnerable population who have fled violence and persecution and are often seeking safety, family reunification and economic opportunity.  Our moral tradition calls on all people of faith and goodwill to stand up in defense of life and human dignity, regardless of one’s immigration status.

Today we are faced with the fact that forced displacement of people is at the highest level since World War II, with more than 65 million people displaced around the world and over 22 million refugees.  Let each of us do something during this month to become more aware of what is going on in the area where we live and work and to try to find one action from the Toolkit that was provided in last week’s news, to make a difference in growing TOWARDS AN EVER WIDER ‘WE’.

Recently, while on vacation, I enjoyed some of the scenic views in the upper peninsula of Michigan.  One of the highlights of my trip was a visit to the butterfly house on Mackinaw Island!  I love butterflies and believe they are the perfect symbol of transformation. They witness to the new life that can emerge in the process of transformation.   The words, “transformation” and “transition” are used often when talking about religious life and the process of initial formation in religious life.

As every butterfly is diverse in its beauty, so too are the women who respond to God’s call to religious life. They bring their various gifts, experiences, and talents to this life.  They are from various cultures and ethnicities.  As the Formation Coordinator, I am often privileged to witness the Spirit’s transforming grace in the lives of women in initial formation.  Another important aspect of this process of formation, is the personal experience of the Spirit’s transforming grace within me.  The ministry of formation is a process of the Spirit which changes both the person in formation and their formators.

Formation is often a time of learning, personal growth, change, and letting go.  Perhaps the learnings are new insights about ourselves, or perhaps new talents are discovered. Formation is a continual process of learning and change.  I remember hearing early in my own formation journey, “The only thing constant about religious life is change!”  I have found this statement to be an accurate assessment.  Being open to change is an important quality to possess for living in religious life.  In fact, openness to change and God’s transforming grace is important in life and in our relationship with God.

My prayer for all women discerning religious life, those who are in formation and Sisters who recently professed final vows, is that they continue their openness to God’s transforming grace. May they also continue to witness to the transformative power and new life proclaimed in the Gospel.

Perhaps God is calling you to discern a call to religious life?  Why not check out the details of our next Come and See Retreat in Akron, OH on September 10-12, 2021.  You can participate in person or virtually.

The Immigration Reform Committee has a message for Dominican Sisters and Associates from Pope Francis entitled “Toward an Ever Wider “We.”  Please click here to read this message that he wrote to us “Dear Brothers and Sisters” for our actions “to make this an ever more inclusive world.”

With the words of the Holy Father in your mind and heart, the IRC asks Sisters and Associates to locate a possible “Community Engagement” action, prayer service, or letter to send to your local newspaper letter in the attached toolkit for National Migration Week 2021- September 20-26. You can choose to implement this action in your local parish or community or share a service or communication with others.  Click here to view the toolkit.

IRC members will offer reflections each week in September to focus our attention on immigrants, refugees, children, and victims of human trafficking.  As you create an action, forward a description to the IRC (c/o cdubick@kent.edu).  Our Dominican Sisters and Associates always choose the “ever wider we” as we declare our common journey in this world with others.