Columbus, OH, is on track to record the most homicides ever in its history. As of October 21, 170 people in our city were murdered. In just the first half of October, more than 40 shootings have been reported to Columbus police. 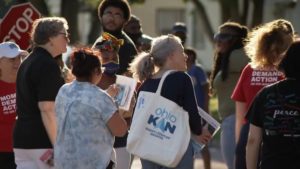 Each Monday night since April, a group of Columbus Sisters and Associates have joined partners like Moms Demand Action, Mothers of Murdered Children, and Listen Good Youth in a march through neighborhoods of boarded-up houses, junked cars, trashy streets, and houses with bullet holes. Our very diverse group of marchers included ex-cons, ex-drug addicts, suburban white women, police, and firefighters, all who want just one thing – an end to gun violence. 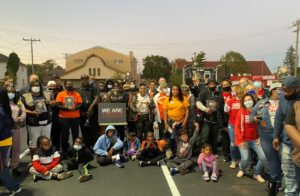 As we marched, we chanted slogans to get the attention of neighborhood residents. Many came out to their porches to talk – conversations that reluctantly lead to stories of their fears and losses. Some were suspicious at first but then joined in our march through the neighborhood.

At the end of each march, we would join for a meal of hot dogs and hamburgers provided by the Dominican Sisters of Peace and our friends and supporters. Marchers and neighbors would eat and talk, getting to know each other and speaking of the hopes 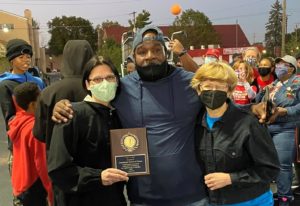 As fall and cool weather have begun to make outside activities more difficult, we held our last march on Monday, October 18. At the time, we were recognized for our part in this important effort. We were humbled to receive a special award for our sponsorship.

Displayed here by Sisters Bea Tiboldi and Ellen Coates, the plaque reads “In appreciation of your time, commitment, and service to the neighborhoods of Columbus.”