Cassidy Rinker, 27, was living in Madison, WI, and working a job that paid the bills… but was not interesting or fulfilling. The stress of the pandemic made it worse. But when her sister Lindsay Fisher, 37, approached her with an idea, she wasn’t sure it was the best next move. 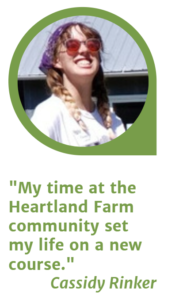 Lindsay had learned to love alpacas on a college trip to Peru and Cassidy tried to be enthusiastic about an opportunity for her to pursue this dream. And the more she thought about it, the more she felt her sister’s excitement. She needed to jump-start her life. Maybe this was the leap that she needed to take?

She quit her job and accompanied her sister to Pawnee Rock, KS, where the Dominican Sisters of Peace own a sustainably-managed farm and tend a herd of 15 alpacas.

“I didn’t know anything about farming,” Cassidy says. “I had lived in cities most of my life, and I was absolutely lost. But the Sisters welcomed me with open arms.”

Sr. Jane Belanger, a longtime member of the Heartland Farm community, took Cassidy under her wing. “She was a great mentor, and she knows – and does – everything, from handling the plants to using the machines on the farm,” Cassidy says. “I have never seen a woman with so much go-get-it-ness.”

“I fell in love with the farm…with the quiet beauty of the land, and the rhythms of the weather and the crops and the animals,” Cassidy said.

Cassidy also spent a great deal of time with Sr. Imelda Schmidt, who has lived on the farm for a total of 14 years.

“Sr. Imelda was so compassionate…she spent hours just listening to me talk about my old job and my old life. She didn’t tell me what to do – she just pointed to things I might consider and let me find my own way,” Cassidy said.

Cassidy signed up for an organic farming apprentice program and asked to remain at Heartland Farm until November to continue her training. Sr. Jane went one step further, hiring Cassidy to apprentice with the new Heartland Farm Assistant Manager.

According to Sonali McDermid, an assistant professor at the department of environmental studies at New York University, organic farming can boost yields over conventional farming because it relies less on water and chemical inputs. Cassidy will be part of a growing movement to feed more people while caring for Earth.

“The next few months will be an amazing learning opportunity,” Cassidy said. “My time with Sr. Jane, Sr. Imelda, and the community here at Pawnee Rock literally set my life on a new course, giving it new meaning, new purpose, and wonderful new friends.”