Dominican Retreat and Conference Center is in the News!

Jim Dillon, a longtime Niskayuna resident, and former teacher and school principal in the Guilderland Central School District, will be at the retreat’s conference center on four successive Tuesday evenings this month to talk about the holiday movie classic “It’s a Wonderful Life.” Dillon will show part of the movie on each night, then discuss why director Frank Capra’s 1946 film had such a wonderful second life after failing to produce a financial windfall at the box office. 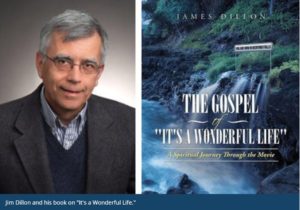 George Bailey, as most probably know, was the main character in the film and played by Jimmy Stewart. Faced with a crisis in his life that leaves him desperate and distraught, George thinks about committing suicide on Christmas Eve by jumping off a bridge into an icy river. But before he takes the plunge, he is visited by an angel who gives him the opportunity to see what life would have been like in his hometown of Bedford Falls if he had never been born. Donna Reed also stars as Mary, George’s wife, and the cast features some of best character actors in Hollywood history, including Lionel Barrymore, William Travers and Ward Bond.

While the movie did draw good reviews when it came out right after the conclusion of World War II — and also received five Oscar nominations, including Best Picture — it was overshadowed by “The Best Years of Our Lives,” William Wyler’s work about veterans returning home from the war. That film won seven Oscars, including Best Picture.

“I think people had just gone through World War II, and they see Jimmy Stewart and Donna Reed and they think, ‘romantic comedy,’ ” said Dillon. “But then they walk into the movie theater, where it’s dark, and they see a very dark movie. At that time it was a hard movie for people to watch. They were sitting in a dark movie theater, which intensified the film, and they just couldn’t take it.”

One scene in particular was hard to bear, according to Dillon.

“George shows up at home where the family is waiting for him, but he’s feeling desperate,” said Dillon. “I think Jimmy Stewart showed a side of himself as an actor that he hadn’t before. He knocks everything off the table, upsetting his family. That’s a hard scene to watch, especially in a dark movie theater. I still have trouble watching it. People didn’t know how to take it, but if you’re watching it on your couch in your living room, you can get the message the way it was intended. It’s not so intense.”

That’s one of the reasons the viewing public came to its senses and realized just how great a movie “It’s a Wonderful Life” was, according to Dillon. The film’s celebrated second life came from people watching it at home on television after the film entered the public domain.

“They forgot to sign the copyright renewal, so after 26 years any of the networks could show it whenever they wanted,” said Dillon. “You need to fill some airtime, so you put on ‘It’s a Wonderful Life.’ People saw it with fresh eyes, and fortunately Capra lived long enough to see the revival of his film. That had to be very gratifying to him.”

Dillon, who retired as a school administrator in 2010, hasn’t slowed down since he left Lynnwood Elementary School in Guilderland. He has written a handful of books relating to education, including “The Peaceful School Bus” in 2008 and “Using Stories for Professional Development” in 2020. A member of the St. Kateri Tekakwitha Parish on Union Street in Niskayuna, he also produced another book during the COVID-19 lockdown, “The Gospel of ‘It’s a Wonderful Life’: A Spiritual Journey Through the Movie.”

“I’ve always had a real affinity for the movie,” said Dillon, explaining his decision to write a book about Capra’s classic. “Sometimes in life you find a work — a piece of art or a movie — that really resonates with you for a variety of reasons. I’m also deaf in one ear, like George Bailey was, so that created another connection for me.

“I’m also very connected to my church, and like churches have book studies and discussions, I thought it would be a good idea to watch the movie with other people and then discuss it,” continued Dillon. “I did that at St. Kateri. It went pretty well, and that got me thinking about writing a book to maybe help other people who might facilitate a discussion about the movie.”

When a St. Kateri parishioner mentioned Dillon’s project to Joy Galarneau, program director at the Dominican Retreat and Conference Center just a few hundred yards up Union Street, Dillon found himself with another gig.

“A friend of mine, a real mentor, recommended what Jim had done, so I went out and read his book,” said Galarneau. “I thought having a program here was a great idea. The book was excellent, the message was beautiful, so I called him and we set up the program.”

The film hasn’t lost its magic for Audrey Kupferberg, a retired University at Albany professor and film critic for WAMC Public Radio.

“There are many Hollywood movies that express family values, the love of community and the importance of doing good over evil,” said Kupferberg. “However, only one film that I know of expresses with such credibility a validation of life itself. In the post-war 1940s, when suicide was not part of many Hollywood stories, this film bravely speaks out.

“Due to the populist approach of director Frank Capra and Jimmy Stewart’s talent to portray a folksy everyman, ‘It’s a Wonderful Life’ has continued to entertain, as well as convey strong messages about living our lives,” Kupferberg added. “It is a unique and highly significant film, and one of my all-time favorites.”

For his presentation, Dillon goes through every major scene in the movie — and there are quite a few.

“I got the screenplay just so I could really look at the dialogue and study each scene, and all that research really made me admire the film even more,” he said. “I’ve also read two books about Capra and I now appreciate how the film was in some ways autobiographical. The movie reflected his life and his experiences, his many ups and downs, and I think Capra must have really identified with George Bailey.”

Dillon’s favorite might be the scene in the Hatch family parlor where Mary and George listen in together on a phone call from an old friend. Mary tries to rekindle an old flame, while George resists. The most important scene, Dillons says, might be in the opening sequence when viewers see a sign that reads, “You Are Now in Bedford Falls.”

“Why would Capra put up a sign like that in the middle of the town,” said Dillon. “To me, it’s because he was very clear that he wanted his audience to realize that the film was for them. It’s not just about George Bailey. The director is telling you that you need to identify with George Bailey, but you also have to go on the journey with him. The film takes you through hell, but you’ll come out on the other side, and eventually you’ll see that life is wonderful.”

‘Four Weeks to a Wonderful Life’

WHAT: A discussion about Frank Capra’s 1946 movie “It’s a Wonderful Life”

HOW MUCH: Free-will offering