Long before the formal training and regulation of nursing, the Dominican Sisters of St. Catharine provided care for those who were in need. The Sisters tended to the sick and dying through several cholera and yellow fever epidemics in Kentucky and Tennessee. They even gave up their own beds to nurse injured soldiers, both Union and Confederate, during the Civil War.

Springfield suffered mightily during the 1833 and 1854 cholera epidemics. This dreadful illness is characterized by violent gastrointestinal issues, muscle cramps, excessive thirst, and usually death within twelve hours. During the first cholera outbreak, there were only ten or eleven sisters, so they recruited lay women to work with them in the ministry of caring for the ill. Both sisters and lay women knew the dangers of this ministry. For over three weeks, day and night, these women worked with the sick and dying, and none contracted cholera. The 1854 cholera outbreak required weeks of caring by the Dominican sisters and their associates.

In addition to the sisters, an enslaved African American man named Louis Sansbury, remained in Springfield while most residents left to avoid the illness. He worked tirelessly to care for the sick and buried the dead and was recognized as a local hero. Upon returning the Springfield after the outbreak, the town’s residents were so grateful to Mr. Sansbury that they purchased his freedom after his owner died of cholera and helped him establish a blacksmith shop to support his family.

During the second outbreak, Mr. Sansbury again provided care and the dignity of burial to any person who needed him. An historical maker is dedicated to him in Springfield, and the city dedicated the celebration of the first annual African American Heritage Week in his honor.

In Memphis, the Dominican sisters opened an orphanage in 1853 to provide homes for children whose parents were lost to cholera, yellow fever, and smallpox. Due to the segregation of that era, the children were divided into groups of white boys, Black boys, Black girls, and white girls. 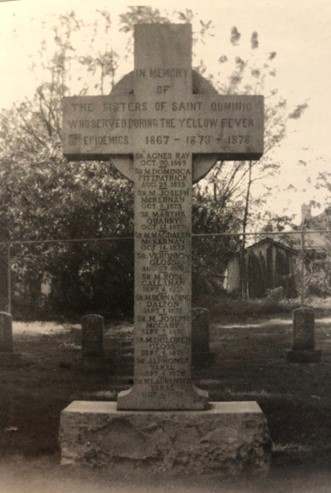 Yellow fever took over the city regularly for 4 decades, with painful symptoms and death within hours. The Memphis sisters cared not only for students, but for many who came to the school looking for assistance as well as members of the community.

At least five friars and ten sisters perished in the last outbreaks of yellow fever, but the Dominicans did not take time to mourn. After the yellow fever ended, the sisters returned to their work in Memphis, opening more schools for white and Black students, and orphanages for both. In gratitude for their service, for many years after the war, no sister in Memphis had to pay for public transportation.

Sadly, epidemics were not the only crisis calling out to our sisters during this time. The Dominican Sisters of St. Catharine did not take a side in the Civil War, but rather, cared for Union and Confederate casualties both in Memphis and in Sienna Vale. The wounded were sent to Memphis by boat and train, where the sisters from St. Agnes and LaSalette school and orphanage cared for them. Sixteen sisters dedicated themselves to this difficult and draining ministry; one of them, Sister Alberta Rumpff, found and cared for her own brother among the war wounded. General William Tecumseh Sherman, whose wife attended St. Mary of the Springs, was instrumental in obtaining the supplies that the sisters needed to nurse the ill and wounded.

One of the most ferocious battles of the Civil War occurred in Perryville, Kentucky, less than thirty miles from the St. Catharine Motherhouse. Although Kentucky remained neutral, both armies traveled through the state, sometimes taking clothing, food, and other resources from its residents. Legend has it that Confederate General John Hunt Morgan raided the Motherhouse of her horses, but his neighbors, who were students at St. Catharine, shamed him into returning them.

All twenty-four sisters at St. Catharine were involved in providing care to the wounded and comforting the dying after the battle, regardless of their military affiliation or religion. The sisters nursed the injured in Perryville and brought many home to the Motherhouse, converting it to a military hospital.

Many years later, the Dominican Sisters of St. Catharine were recognized for their works of mercy during the Civil War. The Auxiliary of the Ancient Order of Hibernians erected a monument in Washington, DC in 1918. In 1961, the Catholic Hospital Association awarded plaques to fourteen religious communities for their work on the battlefields and in hospitals during the war. The plaque awarded to the Sisters of Catharine of Siena, now the Dominican Sisters of Peace, hangs in the Sansbury Care Center, where many retired Sisters live. The inscription reads:

For outstanding service during the Civil War. Presented to your Order by the Catholic Hospital Association, June 14, 1961. They comforted the dying, nursed the wounded, carried hope to the imprisoned, gave in His name a drink of water to the thirsty.

4 responses to “A Call to Mercy”