Do you have memories of sitting on your back porch or in your back yard, on a late summer evening, as the lightening bugs drift across the lawn and you unwind from the day? Or perhaps sitting there for morning prayer in the early morning as the breeze comes in from your garden…

Here at our House of Welcome we have a back porch where we often eat our dinner.  On festive occasions, it is often festooned with twinkle lights, crepe paper, and various brightly colored decorations. 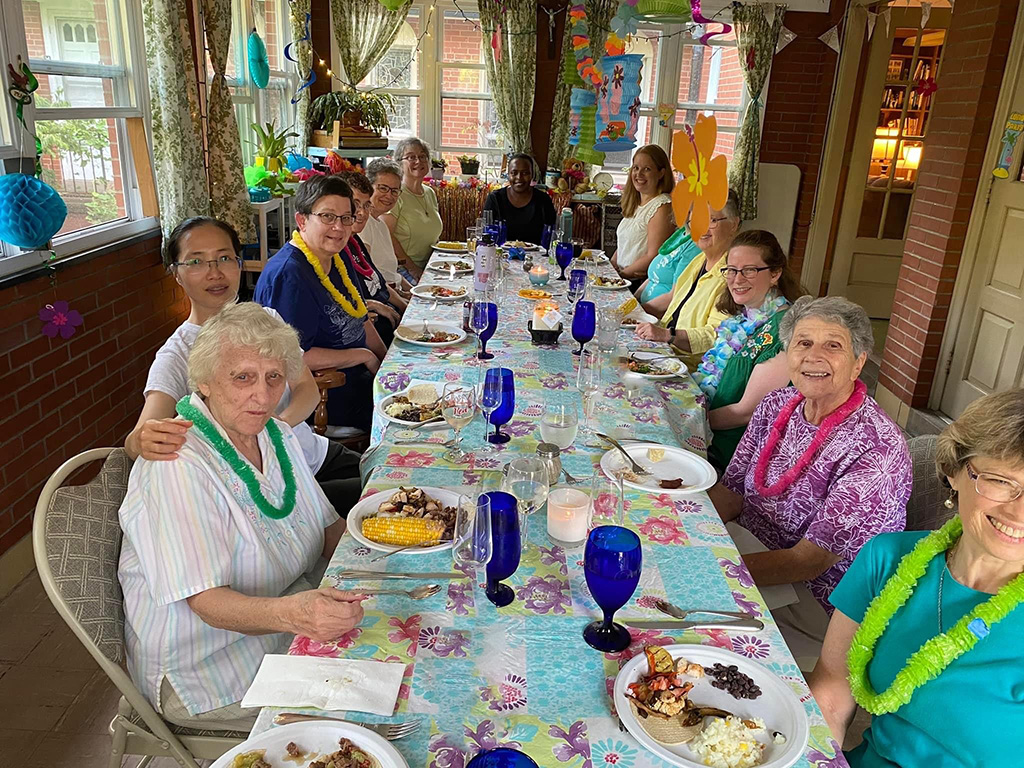 Today, I am eating my breakfast out here.  As I greet the day, I can feel the early morning breeze, hear birdsong, and the traffic on our street.   To be honest, our back porch is not neat and pristine, as some would like it.  Rather, it is as they say, “lived in.”  We have plants and our gardening tools, our lawn chairs we take to Shakespeare in the park, our bicycle pump, and various and sundry other items that we want close at hand. It also houses the extra freezer we need for our large community and a table that will sit up to 14 people if we squeeze tight.

What you can’t see are the memories – the laughter – the raised glasses at the departure of a beloved community member – or the late-night conversations when one of us, just needed to talk a while.

Why not, take a few moments this day to reflect on those places in your life where you can greet the day, unwind, and celebrate life.  Then, make some more memories.

I just finished reading Black Fatigue: How Racism Erodes the Mind, Body and Spirit written by Mary-Frances Winters. It was an unnerving presentation of the intergenerational impact of systemic racism. The author explores how the continued experience of inequities and injustices towards Black people have created physical and emotional tiredness in all Black people. Many times I consider the neighbors around the Peace Center and realize they are not so much resilient as they are resigned.

The book was difficult to read, and I found myself feeling more and more tired myself. Not the kind of tired that comes from hearing the same stories over and over again, or repeating the historical experiences that led to the racial environment still surrounding us every day; but the kind of tired that comes with trying every day to make change and seeing no differences, with trying to strip away the privileges that white people still possess and still deny every day that they have.  It cannot be described as getting tired of being forced to let “them” get away with making white people feel guilt, but as getting tired of arguing not just with the obvious bigots and white supremacists but even more with the white people who say they don’t want to hear about it any more because they can’t do any more than they have been doing; or having any more discussions with white people who say they cannot read another book about racism and stop asking them to do so. There was a headline recently that said “ Most Black people want reparations. They [Black people] don’t believe America will give them any.” How many white people laughed and said, “Darned straight! I never did anything to them. What am I doing to them today? They need to just get over it! I am not giving them a single cent” Maybe it’s best thought of as the kind of the tiredness of people who are frustrated like me with the broken systems and just do not see any ways to repair them. But the trying is ours to do!

As Dominicans we are ever vigilant in our search for truth. Sometimes the truths we find make people uncomfortable. There is nothing more annoying than a white person in discomfort. We cannot tire of getting to the truth and getting the truth out. We cannot tire of speaking truth to power, someone named Catherine from a small town in Italy did that once, and the Pope listened. We cannot tire.

Born on October 3, 1939, in Waltham, MA, Sr. Chris was the daughter of Joseph Francis and Catherine McDonough Loughlin. She entered the Congregation in 1957, made first profession in 1959 and took her final vows in 1964.

Sr. Chris earned her BA in Education and English from Siena College, her MA in English Literature from St. John University, and her MTS in Theology from the Weston School of Theology in Cambridge. She began her long ministry in education, serving as a teacher and administrator in Kentucky, Massachusetts, New York and Tennessee.

Perhaps foreshadowing the future of her congregation, Chris left education to work for peace at Mobilization for Survival, an anti-nuclear organization. She moved on to serve at the Campion Renewal Center, a Jesuit retreat house, and served for nine years as the co-director of the Woman Center in Plainville, MA.

in 1992, she returned to the site of her novitiate work, Crystal Springs in Plainville, MA, where she joined the staff of the Crystal Spring Ecology Center. Sr. Chris recognized the special qualities of not just the farm, but of the surrounding community, calling it a “culture-shed.” In her words, at Crystal Springs “we participate in a geographic region irrigated by streams of local talent and deep pools of human and natural history.”

In her role at Crystal Springs, Sr. Chris acted as a catalyst, re-visioning the ministry and collaborating with those around her to imagine and realize new goals. Of utmost importance to her was the preservation of Crystal Spring for the education and spiritual development of future generations. She took giving up a piece of the property for this purpose as a gift to ensure its continued life as a treasured part of God’s creation.

In her comments at Sr. Chris’ death, Prioress Pat Twohill said that “In many ways, Chris helped to form her Congregations’ conscience in ecological matters. And she did this not only for us but for any number of other like-minded groups.” She used her considerable foresight and her ability to build coalitions to help others care for Earth.

One of Sr. Chris’s final ministries was as Executive Director of the Religious Lands Conservancy. It seems only fitting, as she was working with her Sisters at Peace to preserve another piece of land that has been part of the Congregation’s heritage at the time of her death.

Sr. Chris is survived by her sister, Rita Scudder, and several nieces and nephews, as well as the lands that she loved so deeply.

It’s been a difficult summer in our garden. A groundhog carried off our vegetables. All of them, save a few green tomatoes that are still desperately clinging to the vine, this late in September. They stare at us wondering if we notice their lingering presence. I don’t know when I’m going to get around to picking them off their brown scraggly vine and putting away the wire cages.

If it wasn’t for our dear neighbor Adriana, the postal service (such as it is) would have stopped delivery for lack of access to the mailbox. She was kind enough to wack away at our jungle with a machete. (I’m not kidding). Thank God she did, otherwise, I think people would think no one lived here. It was embarrassing.

We also have a raised flower bed out back by the kitchen door. We grow herbs there: basil, parsley, and a potted hibiscus plant. The basil has passed its peak and is dried out now, too late to gather seeds for next year. Out front, I’m not sure when we will be able to dig up the calla lily bulbs, there are too many of them and that’s a lot of back-bending work. “Why would you dig them up and replant them again in Spring in the first place?” —says me, the non-gardener. Might just have to leave them in all winter. Oh well.

We have excellent excuses: bad back, bad knees, heavy schedules, it’s raining, it’s going to rain, we can take care of it tomorrow, and of course ‘age”. You know the drill. These excuses are ways to explain to ourselves how some ordinary tasks of life can get away from us.  And suddenly, you realize things are getting out of hand. Like taking out the trash and dragging the bin to the curb — sometimes keeping up the house is a drag.

Ah but then! A sunny day for once and just the right timing. I came home from the office one afternoon, pulled around the driveway to the 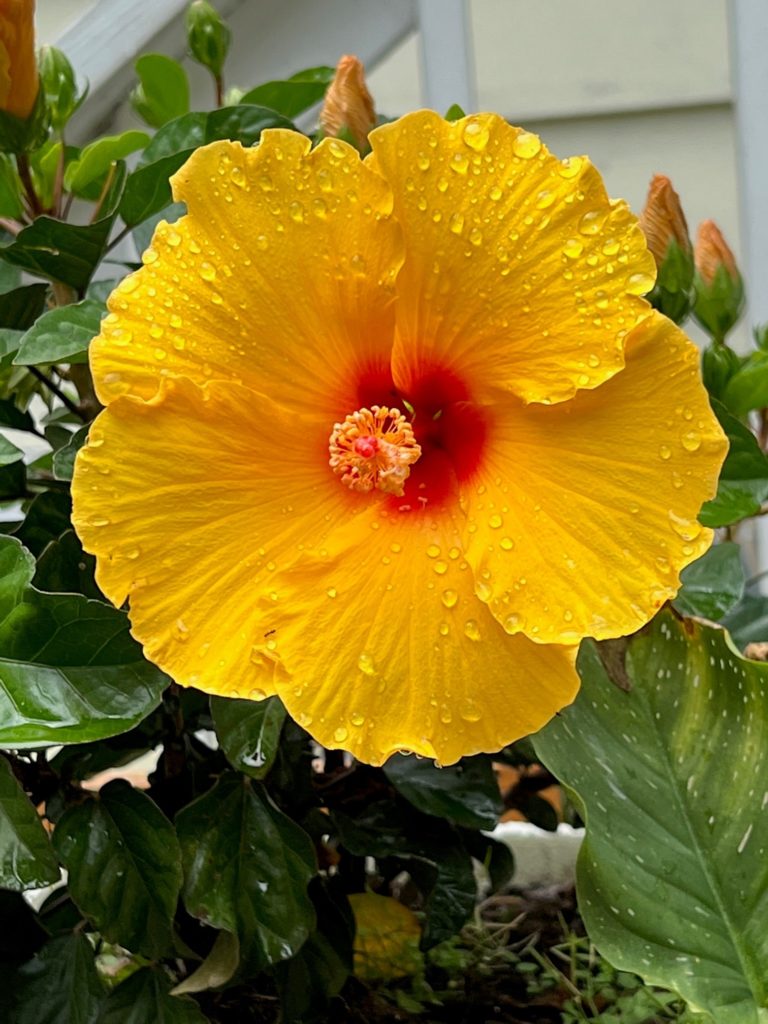 back door and caught a glimpse of something emanating from the raised flower bed.  WHAT THE HECK IS THAT? The color screamed out at me, I thought Adriana put something in there. Holy mackerel! It was the hibiscus itself — as brilliant as the sun itself!  A fully opened erect, proud, intensely yellow circle shining like the sun, with sparkling raindrops that looked like jeweled ice.

Just look at that photo. Is it not shockingly beautiful? Look at the raindrops dancing on the petals.  Notice how delicate the edges are and the ripples that undulate all around the surface. I loved this so much I took a picture and posted it to FaceBook with the caption: After the rain this morning the sun opened this version of itself.

This is a stunning shift in my soul. How is it that a simple flower that is here today and gone tomorrow, can move mountains of blah, I don’t feel like it? Mountains of I’ll get to it later.,

This stunning shift that lifts my soul into brightness, into energy, into AHHHHH. This shift reminds me of the quote from Meister Eckhart: “And suddenly you know: its time to start something new and trust the miracle of beginnings.”

I think I’ll empty the trash and pick those green tomatoes.