A number of years ago a few of us used to walk in a nearby cemetery due to the condition of the roads which were paved.  One evening in late August we happened to notice many Monarch butterflies flying over our heads.  We watched as hundreds pass by and determined they were in the process of migration.

The butterfly, the type of species it is, its habitat, and the time of year when it becomes an adult are factors.  Larger 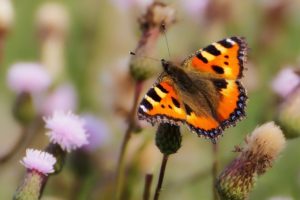 butterflies generally live longer than smaller butterflies.  But size is not a guarantee that a butterfly will live longer.  The average lifespan is one month.  Some types of butterflies such as Monarch and Mourning Cloaks usually live up to eight or nine months.

The Monarch is the only butterfly known to make a two-way migration as birds do.  Unlike other butterflies that can overwinter as larvae, 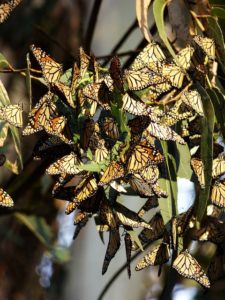 pupae, or even as adults in some species, monarchs can’t survive the cold winters of northern climates.  They seem to have a built-in cue that tells them when it is time to travel south for the winter.  These butterflies use a combination of air currents and thermals to travel long distances.  Some fly as far as 3,000 miles to reach their winter home.

Some butterflies can enter a state of dormancy in their egg, larva, pupa, or adult state.  Those that can overwinter as inactive adults are Small Tortoiseshell, Comma, Peacock, and Brimstone.  They remain dormant in tree holes, rock crevices, and other shelters.  It is reported that the butterfly secretes a type of natural antifreeze in their body fluids to prevent the formation of ice crystals on the surface of their bodies.

Climate change and habitat loss are among the largest threats to monarch butterflies.  Colder wetter winters could destroy these creatures as well as hotter, drier summers.  In the USA, monarchs need places to reproduce and feed heavily on the plant milkweed.  Herbicides need to be discontinued on vegetation and milkweed.

In the whole world, there are 17,500 different species and in the United States, there are 750 species of butterflies.  The Monarch can fly up to 10,000 feet or more up in the sky, much higher than most birds do.

Those of us who witnessed a small bit of the migration of the Monarchs that day in the cemetery are very grateful that we were in the right place and at the right time.