Myanmar is a country located in the western portion of mainland Southeast Asia, with a population of 53 million persons. It was formerly called Burma, has an ancient Buddhist tradition and contains many small ethnics groups. The Catholic population is less than 4%, or around 2 million persons.

The presence of the Province of Our Lady of the Rosary in Myanmar began on November 12, 2010. We currently have three houses: One in Yangon, which is a house of formation for our aspirants, and (during this year at least) it is our novitiate for the country. Fathers of this house also serve in a parish of a district on the outskirts of the capital Yangon which ministers to displaced people from other regions, most of them belonging to the minority ethnic groups. In addition, the brothers assist several communities of religious in their houses of formation.

We have another house in Loikaw, where we serve a parish that includes in its territory several villages. We have a ‘Learning Center’, with English classes, as well as computer skills classes and teacher training. Every year, around 100 young people take these courses, receiving an opportunity to serve their country and have a better future.

Four hours from the capital city is the second largest city of Myanmar, Mandalay. We have a ‘Social Training Centre’ in a remote village, Zawgyi, where we help to prepare students from less-privileged families for the university entrance exams. Each year, around 50 new students graduate, and 50 new students start their training.

Our presence in Myanmar aims to assist the local church in the Christian formation of the laity and in the teaching of theology in seminaries or other religious centers.  We already have 18 Dominican priests from Myanmar, 4 deacons and 15 students of philosophy and theology in Macau. Some of these priests are missionaries in another countries, such as in Macau, Japan, Spain or Philippines.

Currently 9 brothers work in this mission; 6 young people are doing their novitiate there and 15 young people are aspirants. Another 10 brothers from Myanmar are in other missions of the Province and 17 student brothers in the provincial ‘house of studies’ or studentate (our seminary) in Macau. 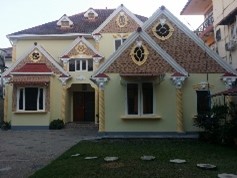 DOMINIC’S HOUSE, Yangon
History
St. Dominic’s House in Yangon was officially opened on the feast day of St. Dominic, August 8, 2011.  His Excellency Charles Bo, SDB (now Cardinal) personally came to inaugurate the house and announced the presence of the Order in the golden land of Myanmar. The house, however, was bought in 2010 and on the 7th of October of that same year the first community of friars was established there with Fr Fernando Muñoz, O.P. being its first superior. From 2011 onwards, the house becomes the center for the aspirants who want to join the Order.

Mission
At the present, the main ministry of the community is pastoral work and formation. The brothers work in the parish of St. Gemma Galgani, Shwepyithar, which is entrusted to the Dominicans by the Archdiocese of Yangon. Since this house is also the house of formation of aspirants, the brothers dedicate their time to the future candidates for the Order. Aside from these, conducting retreats to different religious and diocesan communities is also an important part of our ministry and service to the local Church. 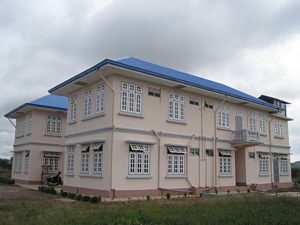 THOMAS AQUINAS’ HOUSE, Loikaw
History
The land on which St. Thomas Aquinas’ House stands was bought in 2008. The foundation of the House was laid in 2009 and the house was completed in 2012. On 23 November 2013, the house was inaugurated with the approval and authorization of the Master of Order, Fr. Bruno Cadore O.P.

Fr. Javier Gonzalez, O.P. Prior Provincial and some other Dominican brothers from our houses in Rome, Philippines and Hong Kong were present at the inauguration of the house. The Local Ordinary, Msgr. Sotero Phamo, Bishop of Loikaw Diocese, and his auxiliary, Bishop Stephen Thjephe blessed the house and welcomed the presence of Dominicans in the diocese. Besides the Dominican brothers and sisters both local and from abroad, many diocesan priests and religious Sisters attended the joyful celebration.

Mission
On December 01, 2013, Msgr. Sotero Phamo, Bishop of Loikaw, erected a new parish, the Parish of Nwalawo, and handed it over to the Dominicans in Loikaw. This parish composes six villages with approximately 2000 Catholics. The six villages are relatively close from each other. Eighty five percent of the parishioners are farmers.

Besides taking care of the spiritual and social welfare of the parishioners, the brothers in Loikaw conduct retreats to religious sisters and pious Lay Associations outside their parish. To the parishioners, we administer the Sacraments; give retreats and recollections to various Lay Pious Associations regularly. We also organize classes of catechism for the children and summer seminars for the youth.

MARTIN DE PORRES’ HOUSE St. Martin de Porres’ Social Center, Zawgyi, Mandalay
The House of St. Martin De Porres in ZawGyi was established in June 2014 by the Master of the Order, Fr. Bruno Cadore, O.P., with the permission of the Archbishop of Mandalay, Msgr. Paul Zinghtung Granwg. It is near to the City of Mandalay, within the region of Mandalay Division, the central area of Myanmar. Fr. John Bosco Lo Lo, O.P., has been appointed the first superior of the house and the vicar of the Provincial in Mandalay region. Bro. Mariano Kai, O.P., was recently assigned to the house as he is preparing for his ordination to the Diaconate and Priesthood.

Considering the urgent need for educational support in the area, the Province decided to offer supplementary courses and evening classes to the students of Grade V to Grade XI. Many of them are Buddhist students in the neighborhood. At this moment (2015), there are 113 students coming for classes and study. Many teachers are hired to help the brothers. In addition to this, the community also offers English Courses and hosts retreats in the Social Center of St. Martin de Porres for the faithful and seminarians.

The situation in Myanmar seems to grow worse each day. People’s rights are being violated, and violence is escalating at an alarming rate. Our Dominican Family in Myanmar shares this painful situation with their people. Along with the Friars and the Nuns, there are two communities of Dominican Sisters there, one of which is in Yangon, where so much violence has occurred. These Sisters belong to the Congregation “Religiosas Misioneras de Santo Domingo”, whose Motherhouse is in Italy. We join in solidarity with our Sisters and all of the people in Myanmar, that there will be an end to the violence and oppression and a renewed respect for the dignity and the rights of the people. 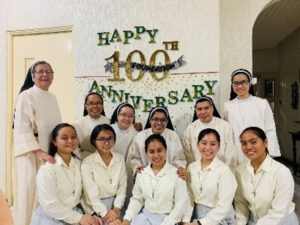