Marking its 24th year, St. Mary’s Dominican High School’s annual food drive collected 58,541 donations for Second Harvest FoodBank. Led by Dominican’s Campus Ministry Club, all class levels and alumnae participated in the one-week drive. The theme for this year’s competition was, “So You Think You CAN Dance.”

Second Harvest Food Bank leads the fight against hunger in South Louisiana by providing food access, advocacy, education, and disaster response. Second Harvest provides food and support to 700+ community partners and programs across 23 parishes. The staff and volunteers distribute the equivalent of more than 48 million meals to 300,000+ people a year.

On Monday, January 30, The National Black Sisters’ Conference released the following statement in response to the brutal murder of Memphis artist, son, and father Tyre Nichols. The Dominican Sisters of Peace stand in solidarity with this statement and demand that our elected leaders move forward with the passage of the George Floyd Justice in Policing Act of 2021. Justice Promoter Sr. Gemma Doll, OP, will be publishing action items toward this goal in next week’s Justice Blog.

The New Year is barely a month old. We have just celebrated the national holiday honoring the life and legacy of Dr. Martin Luther King Jr., the warrior of peace, and the world sadly commemorated International Holocaust Remembrance Day. In a few days, we will celebrate Black History Month as we honor the achievements and contributions of African Americans in the struggle for freedom.

Yet here we are again grieving the death of another young Black man, Tyre Nichols, whose life was taken at the hands of five Black police officers on a night in a quiet Memphis neighborhood.

Tyre Nichols’ life at the age of 29 was taken before he had a chance to fulfill his purpose. This young man was not a person to be feared or perceived to be a threat. He was a son, father, and contributor to society; respected and loved by all who knew him. His only crime was being Black in the wrong place at the wrong time.

Violence against African Americans has been a fact of life in this country since the first slave patrols were created in the 1700s to apprehend runaway slaves. Historically, the system was designed to institutionalize terror against Black people.

The five Black police officers who brutally took Tyre’s life as he cried out for his mother; were indoctrinated into a corrupt system and freely chose to perpetrate violence against other Black people in the name of institutionalized racism.

Unfortunately, police violence is not new. The video of the incident is no different from other police footage, and the only difference is that the majority of the officers are Black!

The National Black Sisters Conference is worried too! When will we wake up as a nation?

How many lives will it take? How often must we bear witness to the senseless killing of African Americans by the police? Where is the collective voice of our religious communities, African American organizations, and Church? The prophet Micah’s words speak to what the righteous are called to do: “The just God demands justice!” God demands a change of heart.

As we move into Black History Month, how will we answer a mother’s prophetic words on the sad occasion of her son’s death? What will we remember? How will this modern-day Black genocide be eradicated? Where do we go from here?

With righteous indignation, we all must act! Dr. Martin Luther King Jr. writes in his book, Where Do We Go from Here: Chaos or Community? “Freedom is not won by passive acceptance of suffering. A struggle wins freedom against suffering.” Let this be our rallying cry for justice!

As the National Black Sisters’ Conference, we are demanding JUSTICE FOR TYRE! and calling for:

Finally, we call on our Church to speak out in the name of the Gospel. This killing is a pro-life issue that is just as important as protecting the life of the unborn.

Tyre’s spirit cries out for justice, and we will continue to stand in the gap, crying out in the name of justice for our people.

United in the struggle for justice,

Over 600 youth from four Memphis-area high schools will gather at the first annual Day of Peace on Friday, February 10 hosted by 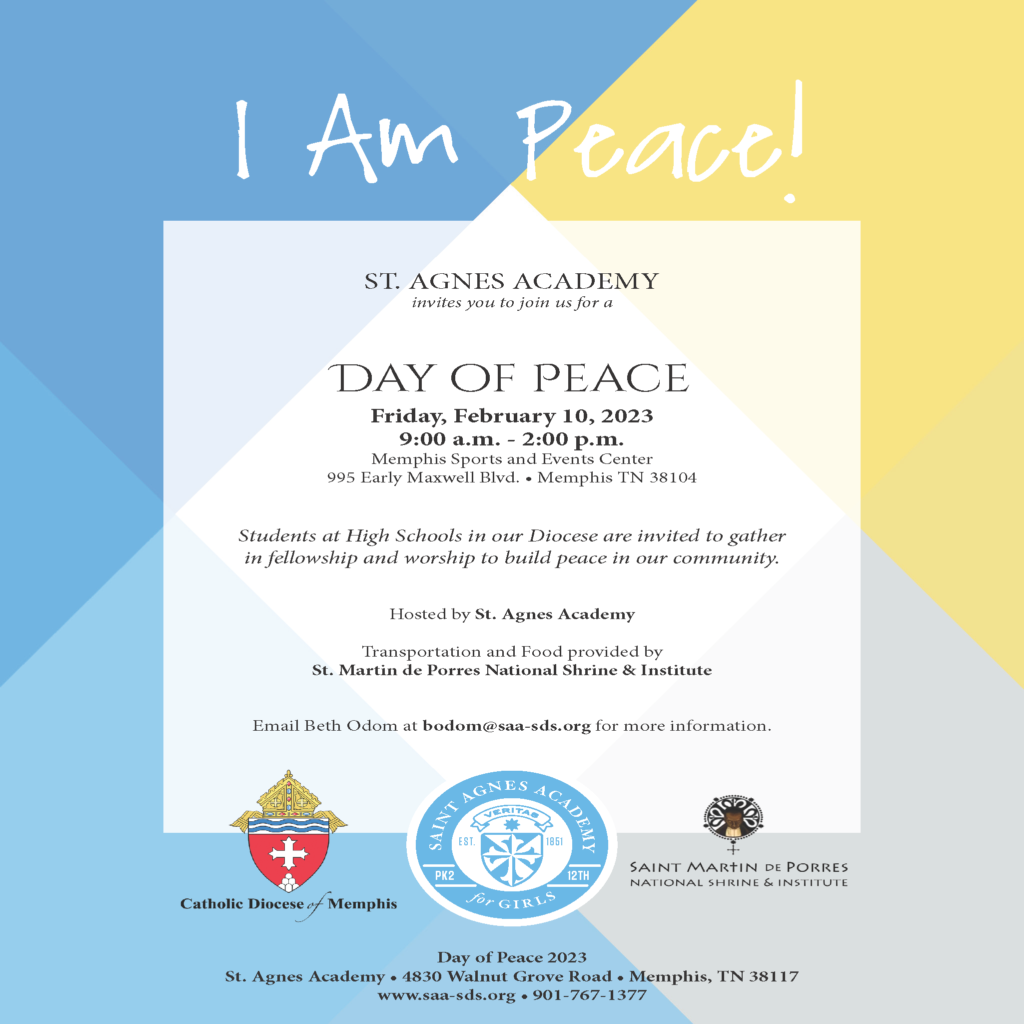 St. Agnes Academy. The event, which takes place from 9:00 am – 2:00 pm at the Memphis Sports and Events Center at 995 Early Maxwell, will include a presentation by Cortney Richardson, CEO of Peer Power, student speakers and prayer and worship as high school students gather to build peace.

The idea for the event was inspired last year by a St. Agnes student who started an organization to fight against violence after losing a friend to gun violence. After hearing her story, her St. Agnes classmates decided to take action to be agents of peace.

“We wanted to host an event for high school students that promoted peace and change,” said senior Isabella Gardino, a member of the St. Agnes student steering committee that planned the rally. “The theme for the day is I am peace. We want students to know that peace starts with them. Everyone is capable of making a change, and we want to help people recognize they have that power,” said Miss Gardino.

In addition to Cortney Richardson, CEO of Peer Power, other speakers include Fr. James Martin Nobles, Director of the St. Martin de Porres National Shrine and Institute and St. Agnes Academy senior Jaila Hampton. Miss Hampton is very active in the Memphis community serving as a council member on Mayor Lee’s Shelby County Council on Gun Safety, a Bridge Builders Youth Action Board member, and as an Ambassador of the Memphis Ambassadors Program. She also founded a youth-led non-profit organization in 2021, Operation R.A.E. (Resources, Advocacy, Education).

“So often in our city we see people reacting to violence rather than responding to it. This event gives youth an opportunity to think about how they can be peacemakers for our time,” said Fr. James Martin Nobles.

The Day of Peace is sponsored by the St. Martin de Porres National Shrine and Institute at St. Peter Catholic Church and the Diocese of Memphis.

“Our goal is to show that we are all agents of peace in our community. I hope everyone leaves the event inspired to make a change in their community, big or small. We hope this becomes an annual event that would grow to include more high school students each year,” added Miss Gardino.

Sr. Dot Trosclair’s New Year’s Resolution was published in the Clarion Herald on January 7, 2023.
She ministers as the Director of the Archdiocese of New Orleans’ Spirituality Center.

As I stand at the beginning of 2023, there are many areas of my life that I wish would be different.

I remind myself that polarization in our church and the world is not a new phenomenon. Theological study, church and world history have all taught me that nothing is permanent in life but change.

I am often reminded of a quote from Rosemary Haughton, a teacher of mine at Boston College, who said that “new life often emerges from the cracks.”

I see a lot of cracks in our ecclesial and political life. If I allow myself tp look only at the cracks, I am certain to be swallowed up by them. If I deny the cracks, I could become angry and defensive. However, if I look at the life emerging from the cracks, I see new life and I feel hopeful.

How do I keep the balance of acknowledging the polarization and not allowing myself to be dominated by it? My day begins by asking God that all I am and do give God praise.

Before dawn I pray with the readings of the day, asking God to help me hear how I am to live this day. My day is spent by trying to live what I have heard in my early morning prayer.

As I listen to others throughout the day, I try to be respectful, and even though we may not agree, I desire to see them as made in God’s image, and that I am called to love them. I like to look at the cracks throughout the day and see what might be emerging literally and figuratively. God is full of surprises if I but open my eyes to see.

Reviewing a different perspective keeps me in balance. Reading opens me to learn new things and to understand things I already know in a different way.

I am currently reading “All Oppression Will Cease” by Jesuit Father Chris Kellerman and am seeing anew the incongruity between the Gospel and the Church’s history regarding slavery. I so appreciate this scholarly work. It helps me to look in the cracks and see how new life might be emerging wherever there is a contemporary type of exclusion in our ecclesial and political structures.

Watching the news on different channels allows me to see news from different perspectives. Reading and listening to opinions different from my own calls me to pray with a Gospel perspective. Seeing the comical aspects of everyday life helps me to laugh, which is good for the soul.

A nightly examen helps me to give thanks to God and to recognize where I could have been more present to God in my service to others. Using the “Reimagining the Ignatian Examen” app on my iPad offers a creative way to look at my day, plan for the next and ask for the grace I need.

I will be looking for new life emerging from the cracks and allowing the God of Hope to continue to use me to build the Reign of God. I long for the balance of hope during this chaotic time of 2023 and beyond.

St. Mary’s Dominican High School seniors Ellen Darcey and Cadence Jackson, and junior Gabrielle Marcello are among the October/November National English Honor Society (NEHS) Flash Fiction Contest Winners: Six-Word Stories. Any member from an active chapter, student or advisor, may submit original flash fiction based on this round’s theme of “six-word stories.” A six-word story is a complete story told in just six words. Their entries were “Birthday Flowers” by Ellen Darcey; “The Burden of Grief” by Cadence Jackson; “The Optimist” by Gabrielle Marcello. The students are members of Dominican’s Veritas Chapter of the NEHS.

Founded and sponsored by Sigma Tau Delta, NEHS is the only international organization exclusively for high school students and faculty who, in the field of English, merit special note for past and current accomplishments. Members of Dominican’s Veritas Chapter of the NEHS must have a 3.75 average in English and a 3.5 GPA. Dominican’s Veritas Chapter head moderator is Kristin Thomas and co-moderator is Charlene Ford.