A Reflection for the Dominican Month of Peace: First Sunday of Advent

A reflection for the first week of Advent by fr. Emmanuel Mulu, OP, Promoter for Justice and Peace for Dominicans in Africa, Vatican Representative to the United Nations in Kenya, and member of the Vicariate of Eastern Africa.

The four weeks of Advent constitute a season of expectant waiting and preparation for the nativity of Christ and His return at Parousia. Waiting is a sign of hope. Hope for healing to a broken world that needs fixing. The world is broken because it abhors waiting, preferring quick-fix solutions to issues that bedevil it. These quick-fix solutions eventually fail, hurting the world even more.

The expected Messiah gives hope because he is the only one who is able to fix our broken world. He is able to mend and repair it.

The Prince of Peace

The first reading from Isaiah draws our attention to a peaceful coexistence. “They shall beat their swords into plowshares and their spears into pruning hooks; one nation shall not raise the sword against another, nor shall they train for war again.” Peace therefore can neither be achieved through wars nor by building walls. It is a gift from God as we find in John 14:27 New Catholic Bible (NCB). However, humanity is at liberty to elect either to embrace this gift or not to. More often than not, peace is not chosen yet the fruits of not embracing this invaluable gift of peace are conflicts, violence, wars, discrimination and their attendant outcomes. Myanmar suffers due to failure to choose peace. Some leaders in this beautiful country refused to embrace peace. They have refused to allow coexistence resulting to untold suffering. Displacement of masses, homelessness, maiming, emotional disturbance and death are the results of this war in Myanmar.

Prophet Isaiah speaks to this situation. He tells nations and governments including Myanmar to turn their swords into plowshares, their spears into pruning hooks, their military budgets into development budgets and hatred into love. Although it may sound difficult, this transformation is possible through the grace of the Messiah, the Prince of peace. Christ is the Prince of Peace in contradistinction to many world leaders who inflict suffering on those they lead due to selfish motives.

Keep watch as you wait

Matthew in the Gospel directs our thoughts towards ‘keeping watch’ as we approach Parousia because the Lord will come at a time we do not expect. We therefore have to keep watch and prepare. This can seem to be a long wait tempting humanity to deviate, a dangerous path to take; a path that many nations have taken. A path that Myanmar has taken. A way of conflict. A way that seems right in the sight of its leaders “There is a way which seems right unto a man; But the end thereof are the ways of death.” Proverbs 14:12.

A ready and expectant spirit inspires careful observation of the times. Preparedness and watchfulness is accomplished through prayer. Those who are not watching are not praying, and those who are not praying are not watching. Prayer is dialogue with God. Constant communication with God keeps a person hopeful while at the same time maintaining a relationship with Him. If the world faithfully keeps watch through prayer, hope will replace despair and fear. Through prayer, tolerance, cohesion and coexistence can abound. This is possible in Myanmar. This is possible in the world and in all nations that are rocked by violent conflicts and wars.

The wars we witness in the world are reminiscent of a desperate world; a world that lacks the preparedness for the Savior, a world full of fear, a world devoid of patience and tolerance, a world that courts an attitude of self-sufficiency and locks the Messiah out of its matrix. This attitude tries to nip hope in the bud casting humanity to the mercy of fear and despair.

The time of Advent is therefore a time to stop war, discrimination and conflicts so that is can embrace the all-encompassing Christ. We are all called to wait for Christ who heals our broken world because waiting is not a waste of time but the price we pay for our healing (John 5:3-New Catholic Bible).

We are hopeful as we wait to celebrate the birth of the Messiah that Myanmar and other parts of the world that witness wars will welcome the Prince of Peace and that they will know peace.

Have an expectant waiting for the Messiah during this Advent Season, won’t you!

Myanmar’s people and history are a glorious mishmash of settlers and invaders from all fronts. The Mon and the Pyu peoples are thought to have come from India, while the now dominant Bamar migrated through Tibet and, by 849, had founded a powerful kingdom centered on Bagan. (Mandalay Region) The Bagan Kingdom was the first Burmese kingdom to unify the regions that would later constitute modern-day Burma, later renamed to Myanmar. For the next millennium, the Burmese empire grew through conquests of Thailand and India and shrank under attacks from China and internal rebellions.

180 BCE beginning of Pyu city-states:  Between the 1st century BCE and the 9th century CE,  speakers of Tibeto-Burman languages known as the Pyu established city-kingdoms

200 CE The Pyu convert to Buddhism

849–1297 The Kingdom of Pagan was the first Burmese kingdom to unify the regions that would later constitute modern-day Myanmar.

1600 Portugal ascends with Burmese Army – introduces Catholicism and attempts to

1947 Panglong Agreement:  independence from the British[

1960 U Nu’s party faction wins decisive victory in 1960 elections, but his promotion of Buddhism as the state religion and his tolerance of separatism angers the military.

1961 U Thant was a Burmese diplomat and the third secretary-general of the United Nations from 1961 to 1971, the first non-Scandinavian to hold the position. He held the office for a record 10 years and one month.[b]

1962 Democratically elected government of U Nu is overthrown by Ne Win, who abolishes the federal system and inaugurates “the Burmese Way to Socialism” – nationalising the economy, forming a single-party state with the BSPP as the sole political party, and banning independent newspapers.  Government guns down student protesters 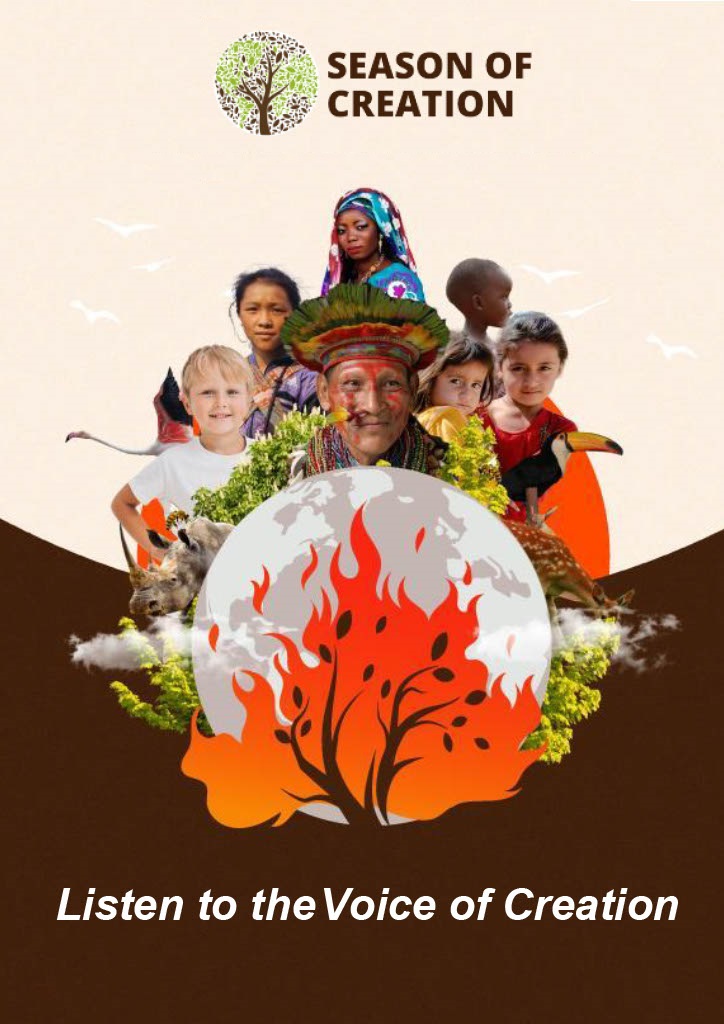 For Sunday, September 18, Associate Judy Hardy of the Eco-Justice Committee looks at the sorrow of Earth and how each of us may lead a life peaceful to those around us and to Earth.

Introductory Comments – The Season of Creation is the annual Christian celebration to listen and respond together to the cry of Creation: the ecumenical family around the world unites to pray and protect our common home

Responsorial Psalm – 79:1-9
Response – Help us God, our Savior
Reflection – How can we avoid the guilt of former generations

2nd reading – 1 Timothy 2:1-7
Reflection – How may we lead peaceful and quiet lives with devotion and propriety?

E – We Gather Together To Ask The Lord’s Blessing:
O – Here I am Lord
C – I am the Bread of Life
D – How Great Thou Art

September 1 begins the annual celebration of the Season of Creation, a time to renew our relationship with our Creator and all creation

through celebration, conversion, and commitment together. During the Season of Creation, we join our sisters and brothers in the ecumenical family in prayer and action for our common home. As part of our observance of the Season of Creation, the Eco-Justice Committee is providing special services that you can use in your own parish or private worship. We are grateful to Sister Barbara Kane, OP, for writing this week’s service.

Introductory Comments
The scriptures of the second Sunday challenge the idolatry of wealth and consumption in today’s world while assuring us of God’s forgiveness and readiness to welcome our return, what Pope Francis has called our “Integral ecological conversion.” And they point us toward the mission that God is offering us despite our past destructive lifestyles.

R I will rise and go to my Father.