This is the third and final blog on common good voting as we prepare for our national election.

“In the U.S. we will advocate for common-sense gun control laws such as requiring universal background checks before purchasing arms, banning assault weapons and high capacity magazines, promoting strategies to prevent gun violence, and provide adequate financial resources to establish mental health programs for victims and predators and prevention for at-risk people.” 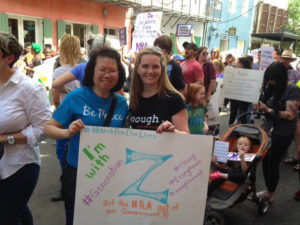 They are called “The Mass Shooting Generation” and they demand change.  They were born into a world reshaped by the 1999 Columbine High School attack that left 13 people dead. They have lived through the Sandy Hook shooting of six-year-olds and their teachers. They stood in fear and shock at the Stoneman Douglas high school attack in Florida.

In this generation, six-year-olds are forced to practice active shooter drills. Parents buy bullet-proof backpacks for their children. According to the National Center for PTSD, 28 percent of people who have witnessed a mass shooting will develop post-traumatic stress disorder (PTSD) and about a third will develop acute stress disorder Our children are suffering mental exhaustion. 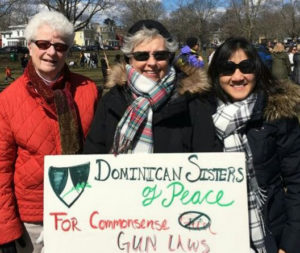 Since Stoneman Douglas, these young people have organized around the country, meeting with state and federal legislators, calling for action.  They do not want to hear, “You are in our thoughts and prayers” again.  They want action to make schools, churches, concerts and shopping malls safer.  They are tired of attending the funerals of their classmates and teachers.

Much time is spent organizing marches and demonstrations, giving tv and newspaper interviews, encouraging voter registration and educating the public on the need for legislation that addresses the causes of gun proliferation and violence.  As in the past, they often hear empty slogans and promises.

“Code Red” has become a familiar sound for students, informing them that an active shooter is in the building.  This is followed by calls to anxious parents, hoping this will not be the last communication. 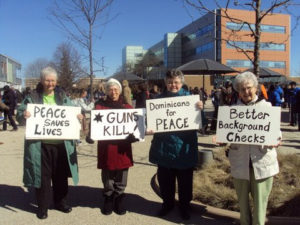 What needs to happen?  Congress needs to pass bills that eliminate the manufacture and sale of high capacity magazines and military-style assault weapons such as the AR – 15 and AK 47.  Police around the country support this ban.

These weapons are intended for military use, and the only reason to have one is to kill many people in a short period of time.  The 2017 Vegas concert shooting, which killed 59 people and injured more than 500, is proof of that.

As common good voters in 2020, we are called to vote for senators and a president who will take protecting students and all citizens from mass shootings seriously, by enacting responsible, common-sense laws to stop the slaughter and to end  the national “code red.”

We often hear the definition of insanity – “doing the same thing over and over and expecting a different outcome.”  As we deal with yet another massacre in the United States, that line keeps coming to me.  There are common sense, responsible solutions to the ongoing social disease of gun violence.  Fifty people lost their lives and fifty-three people were seriously injured by a man in Orlando with an AR-15 assault weapon.  This was not a hunting weapon or a target shooting weapon, but one used to kill many people in a matter of seconds.  This weapon had a high capacity magazine that enables the firing of many rounds in a short time.

END_OF_DOCUMENT_TOKEN_TO_BE_REPLACED

Once in a while it is good to press the pause button and enjoy some successes, and there have been several in the arena of justice.  END_OF_DOCUMENT_TOKEN_TO_BE_REPLACED

The United States has an ongoing crisis that shows no sign of going away. The epidemic of gun violence is the crisis that captured the NEW YORK TIMES and moved it to place an editorial on page 1 for the first time since 1920. Titled, “The Gun Epidemic,” the editorial calls Congress to task stating, “This is a moral outrage and national disgrace that people are legally purchasing weapons designed specifically to kill with brutal speed and efficiency.” The NEW YORK DAILY NEWS takes the republican congress to task for simply “offering their prayers,” instead noting that “God Isn’t Fixing This.” Congress must fix it.

END_OF_DOCUMENT_TOKEN_TO_BE_REPLACED

Three years ago I wrote an article for the Dominican Sisters of Peace entitled, “Children Killing Children Must End Now.” It was written days after the shooting in Chardon, OH, in a high school cafeteria in which one child killed three children and wounded three more. He did it with his grandparents’ 22-caliber handgun, which he took from their home on a visit.

When I was asked a few weeks ago to write again, I said “yes.” Since then I have sat down three times to write and came up empty. What can I say? What can any of us say?  END_OF_DOCUMENT_TOKEN_TO_BE_REPLACED