“Just Reflecting” features a variety of blogs and bloggers discussing various social justice topics that we encounter in our daily lives, whether it be within our communities or own families.

The scene is a mountain in Samaria, a well, and a woman fetching water.  You know the one?  Sure you do.  She’s rather taken aback that a Jewish man is asking her for a drink.

The part of the conversation I’ve been reflecting during these days of lockdown is the part where she asks Jesus about living waters.  His responses shifts her to comment  on the correct place to worship, “Our fathers worshipped on this mountain though you say that Jerusalem is the place where one ought to worship.”

I find Jesus’ response to this is comforting during this season of closed churches. Especially, these holy days. Jesus says, “Believe me, woman, the hour is coming when you will worship God neither on this mountain nor in Jerusalem.  The hour is coming – indeed it is already here – when true worshippers will worship (God) in spirit and truth; that is the kind of worshipper (God) seeks.  God is spirit and those who worship must worship in spirit and truth.”

It seems to me that Jesus is saying that the place of worship does not need to be inside  brick buildings, that it needs to be in that inner space of our human bodies.  Yet, those brick spaces offers us the gifts of Eucharist and community.  This pandemic time is depriving us of these gifts.  Or, is it?

These words of Jesus are pure gift to us in our current time.  Actually, at any time.  As we reflect on his words, we find solace in that we are God’s temples of flesh.  We are the church.  We are the true worshipers who worship in spirit and truth.  Jesus’ words are not empty words.  We can trust that as we worship in spirit and truth that we will be nourished – pressed down and overflowing!  We shall not find ourselves lacking in God’s abundant grace and nourishment.

Normally, this grace would send us out to communities.  Social distancing has gotten in our way, for the most part.  I hope that you are finding creative ways to reach out.  If not, it is enough to relax in the abundance of God’s goodness – pressed down and overflowing!  It’s a kind of worship that God seeks. 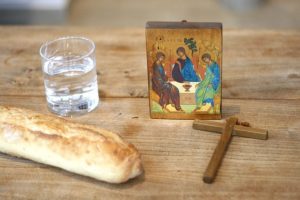 I must say that my heart fell when I read the news from my parish website, “The Bishops of Ohio have suspended all public masses…no services will be observed during Holy Week or Easter.” Knowing that this message was heard by just about every diocese and archdiocese across the United States, and perhaps the whole world, did not bring me comfort.

A cradle Catholic, I can barely recall a time when I have not participated in Lent and the Triduum. Is this what early Christians felt when their rights to attend church services and receive the Eucharist were denied? Did they ask, what am I going to do? How will I live without practicing my faith?

This catastrophe we are facing is not exactly what the early Christians experienced, but I imagine the feelings it evokes are similar.  I have rarely been absent from Sunday services and when I have been unable to attend Mass I feel as if something spiritual and physical is missing.  Attending Mass makes me feel the real presence of God in my life.  It reminds me that I am human and God will always love and forgive me.

In Jeremiah (17:7-8) we are told, “blessed is the man who trusts in the Lord, whose hope is in the Lord. He is like a tree planted beside the waters that stretches it roots to the stream.  It fears not the heat when it comes…in the years of drought it shows no distress, but still bears fruit.”

Jeremiah’s words remind me that during this world-wide pandemic, I must remember to trust in the Lord, place my hope in the Lord to deliver us safely from this devastating illness. I must pray and continue on my journey through Lent and the Triduum, knowing that I am not alone. I will be traveling with the hearts of my fellow Christians, not despairing but looking forward to God’s help.

For online resources prepared by the Dominican Sisters of Peace to commemorate the Lenten season, click here

“The call to holiness requires a “firm and passionate” defense of the innocent unborn. Equally sacred are the lives of the poor, those already born, the destitute, the abandoned and the underprivileged, the vulnerable infirm and the elderly exposed to covert euthanasia, the victims of human trafficking, new forms of slavery, and every form of rejection.”

For me, pro-life means far more than anti-abortion.  I’d like to see pro-life efforts extended to protest the Death Penalty.  I’d like to see support for mothers who deliver babies at term, then keep weekly vigils for them, “The Disappeared” of Central and South America.

Could we re-direct some pro-life efforts to help children wounded by war, gun violence, drive-by shootings, and terrorist attacks?

Malnourished mothers whose empty breasts are unable to feed their babies, people everywhere who are unable to provide adequate nourishment for their families because of unemployment, poverty, drought, flooding, crop failure, and other loss of agricultural land caused by climate change, need our help.

Did you see the picture of the father with his little daughter, drowned in a river while trying to cross into the U.S.?  Their reality, and that of all immigrants, especially at the U.S. southern border is death-dealing, certainly a pro-life issue.

There is life, and there is life. . . or is there?  Where are the advocates for our fellow human beings in these wretched situations?  Are they organized?

True respect for life, all life, true pro-life supporters, would advocate against all of these wretched conditions, and more.

A credible pro-life stance would not be pro-birth only; pro some life, not all, but pro-life for all the members of our one human family; the family of God.”

In this holy season remember that “God became one of us—all of us.”

“Grateful-Grateful—Gratefulness—is flowing from my heart.”  The refrain the gospel choir frequently sings in my nearby African-American parish underscores my remembrances and narratives about a fall that necessitated a recent trip to the ER.  My feet somehow entangled themselves in a neighborhood grocery cart.  I fell backward, my head bouncing once with a sickening, terrifying thud on the parking lot, my left elbow absorbing part of the impact.

Immediately folks of all ages, genders and ethnicities rushed to my assistance, retrieving my purse and two small bags; offering help in getting me upright, a chair inside the store, a glass of water, a bag of ice for the knot on the back of my head.  Their empathy palpably cushioned my distress.

Dismissing their repeated offers to call for an ambulance, I phoned Sr. `Mary Ann Culotta.  She immediately changed her plans and drove me to the ER.  The medical team kindly tended my bruises and, within an hour, tendered the good news: a scalp contusion (bruise), not a brain concussion.  Sr. Ceal Warner retrieved my car.  What an unexpected but gratefully received conclusion to a day that began with our leisurely morning in St. Bernard civil parish. While driving to swamp-surrounded Shell Beach I shared my original EMD congregation’s 60+ year history of ministry in three parishes, my current monthly faith formation sessions with a small group there, and the availability of a lovely home for private retreats.

Mary Ann told of falling outside a bank in San Francisco when she was a graduate student several decades back.  She said, “I felt like I was invisible.  Not one person offered to help me.”  How vastly different my experience!  My white hair was surely not the crucial factor in our disparate experiences.  I’m inclined to credit southern hospitality, New Orleanians’ innate religiosity, and my nearby Dominican sisters, for the redemption I was granted.  What a gift to be able to name and sing about the falls into grace that uphold each of us through our daily ups and downs.

Is anyone surprised I chose the 10th anniversary of the Dominican Sisters of Peace and Associates to blog about? Really?

How did we get here? Hard work, trust in God, desire for a future; all of those and so much more . Some Sisters have said they don’t want to spend time looking back on these 10 years. They were hard or painful and they would rather think of the future. Others look back in order to see where we have been and did we miss any signs to show us where we could be? There’s nothing bad about either of those perspectives. I tend to put them together as a both/and.

I do believe we have to know where we’ve been to see where we are and where we could go. Do we scrap it all and start from scratch? Do we just keep everything and create more? Do we take the best from everything and add to it?

We are at a moment in our history. No one dreamed those first Sisters were laying the foundation for a very different congregation to form 100 years or so after the first one, but they did. What has been and will be built on this new foundation is very much a work in progress fraught with fear and hope and nostalgia and promise. Some of us will not see the results or maybe even be able to comprehend what we are seeing. It will happen be assured of that.

Sisters and Associates are celebrating this weekend and even in the midst of it we will be asking what’s next? Together, we will figure it out and move with the Grace and Wisdom that comes from the Spirit.