For further information on any of the news items listed here, please contact Alice Black, PhD, OPA, Director of Communications & Mission Advancement, at 614-416-1020.

Dominican Sisters and Associates of Peace are celebrating the commitment ceremonies of 41 new Associates and the four-year renewals of 81 Associates in McLean, VA; Columbus, OH; Akron, OH; Niskayuna, NY; Oxford, MI; and Great Bend, KS. Dominican Associates are lay people (both female and male) from all walks of life and cultures, who have formally affiliated with a religious congregation – the Dominican Sisters of Peace. Our Associates are involved in the life of the community and supporting the mission of the Sisters which involves prayer, service, study, events, and other gatherings. We bring our expertise and gifts as lay people to do the ministries that we are called to do in our own lives (learn more). Below is a recap of the events in each area.  END_OF_DOCUMENT_TOKEN_TO_BE_REPLACED

Dominican Sister of Peace Mary Sheila Burson died at Mohun Health Care Center, Columbus, OH, on Saturday, August 8, 2015. She was preceded in death by her parents David Burson and Augusta Morey Burson; sisters Mary V. Gury and Olive Shaw; and brothers, Bartlett and Joseph Burson. She taught for many years at St. Mary’s Dominican High School in New Orleans and was a Liturgical Music Teacher at Rosaryville in Ponchatoula, LA. She earned a degree in Music Education from Southeastern Louisiana University.

Sheila grew up in a small river community of Reserve, LA. She had a wonderful career as an organist, choir director and piano teacher. Sheila entered St. Mary’s Dominican Congregation on September 7, 1 958, at age 38. She was the last of the seven Sisters who evacuated here in 2008 after hurricane Gustave.

I have thought about this often. What will that dwelling place be? Will it be different from others? How will we be united if we each have a dwelling place?

While I know this is just an image, something to help us anticipate what awaits us as we enter eternal life, I still like to think about it. How about you? What will your dwelling place look like? (Mine will be Mardi Gras).

I have thought about what Sheila’s dwelling would look like. Sheila was a masterful Gregorian Chant musician. That was her life for at least 20 years. For a number of those years Sheila taught the chant to postulants, novices and young professed in Rosaryville. She was a wonderful teacher who was even able to make choir practice enjoyable for non-singers, like yours truly.

So there will be Gregorian chant in the background of Sheila’s heavenly dwelling. It will include music from the Graduale – remember that hymnal? There will also be a group of angels who Sheila will lead and direct in the chant for heavenly events. Directing singers in the art of Gregorian chant fed Sheila’s soul. That was heaven on earth for her.

For several years, many of you saw Sheila sitting in the room with the birds. She loved to watch them and to listen to them. There will be birds in or near Sheila’s dwelling place. Finally, there will be a special place for Sheila to spend time with her God.

Years ago when Centering Prayer came to the fore, Sheila felt called to pray that way. The two of us used to talk about prayer. I was bowled over when Sheila talked about her experience in prayer. I still stand in awe when I remember those conversations. I also remember how humble she was in relating her experience.

I can only imagine what it was like when Sheila met God face to face. Sheila was my novitiate companion and I will miss her so much but I know that I and all of us have a faithful friend in heaven.

Funeral services were held Tuesday and Wednesday, August 11 and 12 at the Columbus Motherhouse Chapel followed by burial at St. Joseph Cemetery. Memorial gifts in Sr. Mary Sheila’s memory may be submitted securely online or mailed to the Dominican Sisters of Peace, Office of Mission Advancement, 2320 Airport Dr, Columbus, OH 43219. 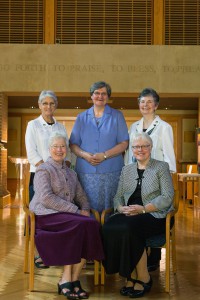 COLUMBUS, OH – The new Leadership Team of the Dominican Sisters of Peace began their six-year term in a ceremony at the Martin de Porres Center on Saturday, August 8, the feast day of St. Dominic, the founder of the Dominican Order. About 250 Sisters, Associates, family members and friends attended the celebration that was webcast live to five other motherhouses and numerous other locations around the US and the world.  END_OF_DOCUMENT_TOKEN_TO_BE_REPLACED 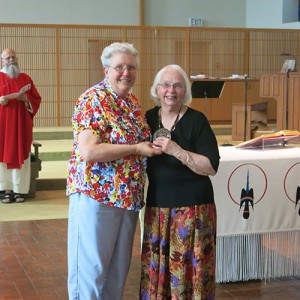 Great Bend, KS – At it’s annual meeting, the Dominican Institute of the Arts (DIA) named Dominican Sister of Peace Elaine DeRosiers, OP, its 2015 Fra Angelico Award recipient. The honor is presented every year to a DIA artist who exemplifies Fra Angelico’s dedication to furthering the Holy Preaching through the arts.  END_OF_DOCUMENT_TOKEN_TO_BE_REPLACED 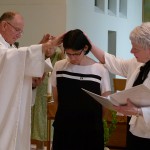 Posted in News
| Tagged in news