Creator, we are embarking on a journey
towards greater love for You,
our brothers and sisters, and Your creation.

Holy Spirit, we humbly ask that You guide us on our journey,
that You bring us Your illuminating and warming fire
as we seek to discern and respond to Your will.

Redeemer, we thank You
for the new hope that unites us with all those
who are healing their relationships with God,
creation, and the human family.

We pray for commitment and unity
as we live out an integral ecology
to protect all life on earth.

We ask this in the name of Jesus Christ, our Lord. 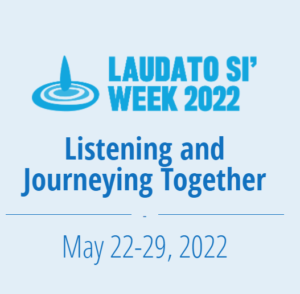 Laudato Si’ Week 2022 will be celebrated May 22-29. This will mark the seventh anniversary of Pope Francis’ landmark encyclical on creation care. The global celebration will unite Catholics to listen and respond together to the cry of creation, rejoice in the progress we have made in bringing Laudato Si’ to life, and intensify our efforts through the dynamic Laudato Si’ Action Platform, walking the “Synodal” path.

Please join the many global events being held to invite reflection and celebration of the seven Laudato Si’ Goals. Each event will highlight a different goal and region in the world.  All events are listed in Rome time; click here for a time converter.  Local communities are encouraged to organize events and share them on the Laudato Si’ Week events page.

MAY 24 – All day
Empowering ECO-mmunity, Embracing the Poor

MAY 29 – All day
Prayer Gathering. Community resilience and empowerment as part of our Synodal Journey

Akikiki, Hawaii is home to a type of native honeycreeper. Hawaiian honeycreepers are a group of small songbirds. Many have been driven to extinction since the first humans arrived in Hawaii, with extinctions increasing over the last 2 centuries following the European discovery of the islands, with habitat destruction and especially invasive species being the main causes.

Elkhorn Coral is one of the most important corals in the Caribbean. It forms dense groups called “thickets” in very shallow water. These provide important habitats for other reef animals, especially fish. The greatest threat to elkhorn coral is ocean warming, which causes the corals to release the algae that live in their tissue and provide them food, usually causing death. Other threats to elkhorn coral are ocean acidification (decrease in water pH caused by increased carbon dioxide in the atmosphere) that makes it harder for them to build their skeleton, unsustainable fishing practices that deplete the herbivores (animals that feed on plants) that keep the reef clean, and land-based sources of pollution that impacts the clear, low nutrient waters in which they thrive.

The Bog Turtle is North America’s smallest turtle, growing only to 4.5 inches in length. It is classified as federally-threatened on the U.S. Fish and Wildlife Service’s Endangered Species List. Habitat loss and fragmentation and forest succession represent the primary reasons for the decline of this species. In the past, bog turtles could move to nearby habitat if conditions changed. However, remaining habitats have become more isolated because of land development.

The Bull Trout is listed as a threatened species under the U.S. Endangered Species Act throughout its range in the contiguous United States. Bull trout reproduction requires cold water and very low amounts of silt, both of which are negatively impacted by road building and logging. Additionally, its need to migrate throughout river systems may be hindered by impassible fish barriers, such as dams.

In the lower 48 states, Canada Lynx are considered threatened under the federal Endangered Species Act. Lynx were often trapped for their valuable fur during the last century, and this practice continues in Canada. Today, aggressive logging, road-building and development of lynx habitat have severely fragmented their living space. Snowmobile trails and roads pose problems for lynx because these packed-snow pathways give high-country access to cougar and coyote (which can eat lynx), and bobcat (which compete with lynx).

Pacific Salmon  are cold-water fish, and die when exposed for very long to freshwater temperatures above about 20º C. (72º F.) Global warming has pushed the average summer temperatures of many west coast river systems above that mortality threshold, killing many fish. Global climate change is also diminishing total river flows throughout the northwest and California, as well as changing the basic hydrology that these fish evolved with. Depleted genetic diversity, as well as accelerated habitat loss due to human development, has reduced their ability to respond to these stresses. Changing ocean conditions, including ocean acidification, are causing additional stresses to these populations from global warming.

Leatherback Sea Turtles face threats on both nesting beaches and in the marine environment. The greatest of these threats worldwide are incidental capture in fishing gear (bycatch), hunting of turtles, and collection of eggs for human consumption. The Pacific leatherback turtle populations are most at-risk of extinction.

Grizzly Bears in the contiguous United States are currently protected as a threatened species under the Endangered Species Act, as there are less than 1,500 grizzlies left in the lower 48 states. Human-bear conflict remains the largest threat to the North American grizzlies, as well as the loss of major food sources and suitable habitats due to climate change and development.

The main threat to the Flatwoods Salamander is loss of habitat.  Pine flatwoods-wiregrass habitats have suffered rapid loss in the southeast due to agriculture.  Continued loss of habitat could cause extensive population loss. In addition, the lowering of water tables due to climate change is elminating the places where the salamander’s eggs mature.

Two-thirds of the world’s Polar Bears could be extinct by 2050 if greenhouse gas-fueled global warming keeps melting their Arctic sea-ice habitat.

Monarch Butterflies are threatened by deforestation of wintering forests in Mexico, disruptions to their migration caused by climate change, and the loss of native plants (including milkweed species but also all nectar-producing native plants) along their migratory corridors.

American Pikas  are suffering because climate change has brought higher temperatures to their western mountain homes. Pikas have already disappeared from more than one-third of their previously known habitat in Oregon and Nevada.

Some time ago you were sent a listing Steps you could take in support of the Laudato Si’ Acton Platform (LSAP):

Here’s something else you might consider and pray about during Lent… making a formal commitment to join the LSAP.

Joining the LSAP is relatively simple.  Visit the Laudato Si Action Plan website here.  It is possible to enroll as a family and individual, organization and groups, etc. Perhaps you could explore the website, first and then enroll… there are many wonderful resources to discover!

The Peace and Non-violence committee has submitted the following prayer in response to Pope Francis’ call to pray for peace in the Ukraine.

Ever and All Loving God,

As we follow news of the mad progression towards war, we pray and we plead for a logic different from the one based on geopolitical competition. We pray for a change of hearts and minds, for de-escalation, and for dialogue instead of threats.

All peoples are Your children. And Your children find themselves on both sides of the current confrontation. Should this situation descend into war, it will be both Ukrainian and Russian families that will suffer the loss of brothers, fathers, husbands, children, homes, neighborhoods, and ways of life. But You are a God of peace and love, not war and bloodshed. Though the things that make for peace may be hidden from the eyes of those driving the march to war, we pray that those eyes may be opened and that peace may yet prevail.

Let us pray together that everyone recognize that we have a common home and that more, much more, unites us than divides us.

Let us pray also that the world never look away. Pray that we always remember the situation in Ukraine is real. It kills, maims, and destroys even now and that an escalation will generate more deaths and more injured, more tears and pain, more fears and hatred. Pray that we continue to seek and to share the truth which gives authentic freedom and wisdom.

We make this desperate prayer secure in Your love, through Jesus, our Lord,