Be inspired and encouraged with a weekly reflection on God’s Word and every day life.

“Real dialogue is where two or more people become willing to suspend their certainty in each other’s presence.”

I wish I knew the source of this quote. But it has been hanging around my mind lately and it reached into the front of my focus today.  It so happened, that I recently attended an LCWR meeting about the future of religious life and a little flareup happened at my table when some of us disagreed with the notion of being “ecclesial women”. Sometimes all you have to do is mention THE CHURCH and sparks fly, tempers flare, and dialogue shuts down.

Of course, Dominicans subscribe to the idea of “disputatio.” That is, the willingness of two people to listen carefully enough to each other that they can suspend their own judgment of each other. Both parties agree to engage in the pursuit of truth together.  Both are willing to recognize that pursuing the truth— by acknowledging the value in the other person’s thinking— can lead to a better understanding and acceptance of the other. Thus, both gain new insight and perhaps, a moment of peace.

But be warned, talking to one another in this way is not easy. There are costs and obligations of true dialogue.  It takes practice to become willing to suspend certainty in each other’s presence. It takes conscience effort to suspend your own judgment of each other. There is a burden in knowing the truth, in being open to the Spirit, who will tell you what you need to know.

And talking to each other in this way could cause a revolution. It might result in a more thoughtful approach to hundreds of things, like dinner table conversation, public hearings on social problems, not to mention a church where everyone can find a home and be respected for who they are.

Imagine our world when talking to each other actually results in action. If we can’t even talk to each other then how in heck are we to solve the serious social problems we face?  Can we talk? I’m not so sure today.

Dear God, grant me the courage to suspend my own certainty long enough to hear what another person is saying. Help me not see it as holding my breath until the other stops talking.  But that I would breathe through the conversation, inhaling their ideas and allowing my own to exhale in a gentle letting go. Help me to be patient, and willing to listen openly to others, especially the people with whom I disagree.

White supremacy is a sin. Period.

We have become accustomed to seeing the signs saying “Racism is a Sin. Period.” So we face that, but what about the rest of the problem?

“Racism is a Sin” was a statement made by the American Bishops in their 1979 pastoral letter “Brothers and Sisters to Us”.  The Dominican Sisters of Peace and Associates have made it a very public statement posted on signs in front yards, on windows and other places. Is this enough to counteract the sin of White Supremacy?

More and more acts of violence are perpetrated in the name of white supremacy. After all, we are the master race, correct? White folks need to get over this in a big way but how?

Did you know you can Google “how to prevent white supremacy?” What you will find is amazing. Ben & Jerry’s Ice Cream company has created 12 ways; the National Association of Student Personnel Administrators has given us 5 ways; CivilRights.org shows us 10 ways and Green Peace also gives us 5. There are so many more groups that are trying to help us and suggest practical every day ways we can create a world that is safe for everyone. 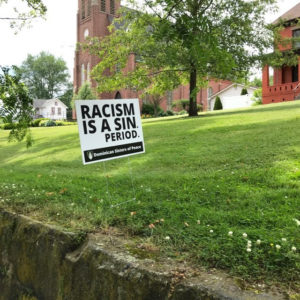 Someone already gave us the Way to destroy White Supremacy. You might remember this. “Love one another, as I have loved you” Jn 15:12; and, “Love your neighbor as you would love yourself” Mark 12:31, LK 10:27; and “Whatsoever you do for the least of my people, that you do unto me” MT 25:40. Seems obvious yet so hard to accomplish.

Let us pray together that we can be true Gospel people, and realize that all the ideas from all of those other groups pretty much stem from ONE WAY.

“My sheep hear my voice…They shall never perish… No one can take them out of my hand. “There is a great deal to unpack in today’s gospel but I would like to focus on these few words at the end. What does it mean to be in God’s hands?

A very good woman, hurting from a great loss in her life, once said to me, “Why is this happening to me? I’ve tried to live a good life.” And she had.  So maybe it’s good to begin with what does being in God’s hands not mean.

It does not mean that we will be protected from the losses that come with living: Family members and friends die. Work we love comes to an end. Our bodies becomes less and less reliable.

It is security that God’s hands provide for us…the security of knowing that no matter what happens to us we are not alone…that God is with us, holding us closely, and will never let go.

This of course is the long view. In the short run, things can be pretty rocky. And we can help each other with that. We can, and should lend a listening ear, the comforting embrace.  We can help each other over those rough passages that inevitably come. We can be part of a safety net for each other.

“Let the one among you who is without sin be the first to throw a stone at her.”

Again, the Scribes and Pharisees are at it. They again try to trick Jesus. This time it is pitting the Jewish law against the Roman law. The woman apparently was guilty of adultery – an offense punishable by death according to the Jewish law. But Israel at the time was governed by Rome. The Roman law had control over who could be put to death and who not. So the Pharisees thought they had the perfect trick. Would Jesus let her go – following the Roman law upsetting those following him? Or would he be faithful to the Jewish law in which he was schooled and taught others to live?

Again, Jesus wouldn’t let himself get caught in the trap. Instead, he invited those standing around to search their own hearts. Who are they that they can make a life or death decision about someone else? They, like each of us, need first to examine our own hearts and intentions about our own actions, before we are qualified to make any judgments about the guilt or innocence of another.

“Let the one among you who is without sin be the first to throw a stone at her.”

How can I judge another to be guilty of a sin (whatever the sin might be), when I am guilty of that same infraction? That can apply to all of us in many different situations. It may not be a serious offense that has occurred, but it does call us to examine our own consciences before making judgments about others. If we would be slower in judging others their wrongs, what a more peaceful world we would live in.

I have started my annual round of doctor visits for check ups, etc. Somehow I have managed to lose weight (not sure where exactly), my blood pressure and other stuff  are normal but my potassium is low…..bring on the bananas!!! OK, enough self revelation for today.

If you have visited your doctors recently have you noticed there are more questions about your mental health than there used to be? The system I am a part of has included in its pre-check a long series of questions about stress and unhappiness and anxiety, etc., than it did before, around here at least. Then today, my physician asked two additional questions. It allowed for more conversation time than we had had before and it allowed for more information to add to any physical concerns that might be present maybe because of the stresses.

It cannot be denied that the events of these last two years have forced us to dig deep into our reserves of joy and relaxation and inner peace. Just when it seemed COVID 19 was on the down side, along came DELTA and then OMICRON. Wear a mask, don’t wear a mask; get vaccinated, don’t get vaccinated. There is a rumor of a new variant in Europe, should we be worried? And now the war in Ukraine and all the collateral damage. This is all on top of normal life issues that impact us in any normal situation.

So, what can I do? These kinds of stresses and the anxiety they cause are a little deeper than usual. I saw a quote the other day attributed to Ruby Dee, an African American actress, that said “If you pray, don’t worry. If you worry, don’t pray.” I think that is another way of saying, “Be still, and know that I am God.” Some days it might be hard to pray, so just be still. God knows what is in my heart and will hear what is there and will answer accordingly.