The Hope in Grieving

The Hope in Grieving

Sadness is universal. It affects young and old, every race and every culture. Even animals grieve – and a grieving young walrus is the central character of a book by Sister Rosemary Loomis, OP.

Sr. Rosemary has been a grief counselor for more than two decades, but two years ago, she felt a call from God to take that ministry of consolation to a new level by creating a book that addresses grief and grieving.

The result was “Henry’s Hope,” a children’s book that tells the story of Henry, a young walrus, and how he copes with grief after his father is killed by tusk hunters.

More than 500 “Henry’s Hope” books have been sold in the U.S. and elsewhere. Sister Rosie has continued Henry’s story in a new book that was published this fall called Henry’s Gift. In Henry’s Gift, a grown-up Henry is now a grief counselor and helps his friends and neighbors deal with the many types of grief that we all bear. 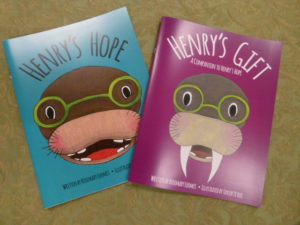 Sr. Rosie has visited many local elementary schools to read her books and discuss grief and loss with the children she meets., but she says that the Henry books are not just for children.

If you’re interested in learning more about Sr. Rosie’s books or buying a book for yourself, visit her Facebook page at @SisterRosiesBooks or email her at sisterrosiesbooks@oppeace.org.