Last October, I and 4 or 5 other Dominicans attended the SOAW gathering at our new destination, Nogales, AZ. I only remember seeing the others once, at the Sunday morning gathering at the wall, which you can see in photos is a series of square steel beams about 30 feet tall. They were on one side (Mexico) and I was on the other (USA). In Columbus, GA, we could only be on one side of the “Wall” (fence). I was glad we could reach through the wall and clasp hands, which I did with at least Conni Dubick, OPA.

As usual, we had very good workshops on a large variety of subjects.  I remember two especially, The Veterans for Peace and the Tohono O’odham Hemajkam Right network. The large Tohono O’odham native reservation is just west of Nogales and hasn’t had a wall, so many refugees go through their territory. The US government is going to put up a virtual electronic wall, as a young Tohono O’odham lawyer explained to us.  Besides the intrusions of all kinds on their land and culture, the natives will also be spied upon whenever the various spy agencies desire.  She took us on the usual US justice path natives have to travel, and, if the government finds it necessary, they will take it back to the Doctrine of Discovery, which always wins the case for the government. This Doctrine was finalize by a pope in 1493, calling newly discovered peoples savages who can be killed and their 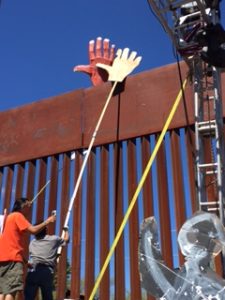 land taken as desired by “Christian” nations. Some groups are trying to get Pope Francis to denounce it. Isn’t it interesting that US law accepts it, even though made by a pope? I would hope that Dominicans around the world would make it a priority to have the pope reject that Doctrine as anti-Christian and not a worthy legal pronouncement.

On Saturday, the Vets for Peace led everyone, about 700, to the border. As on Sunday, about half crossed the border, including me and my sister and husband, and the other half stayed across the border from us. As we were processing down the US streets to the border crossing, police were everywhere, sometimes yelling at people to stay off the streets, etc.  When we crossed, there were no police of any kind around. As we walked Mexican streets, police passed by and waved at us with big smiles. It was such an obvious difference that I thought to myself, I went from a police state to a country of freedom. Of course I know the reality of Mexican cartels, but also of US detention centers for families of all kinds and how awful they can be, especially for the children.

At the Vets for Peace Workshop, about 50 people in a circle, took turns telling of an important moment in their quest for peace. At one point two Vets were sitting side by side, but didn’t know each other. The first told how he had returned to the US and became a drug addict, since the war had left him in such a bad emotional state. He finally got caught, was given a long sentence, but, when he got out, some Vets for Peace took him in hand, gave him a reason to live, and he’s been active with them and sober ever since. Then the guy next to him said he was a medic in Vietnam and was told by the CIA to feed LSD to some of the soldiers, and he went home honorable and with pay, etc. We all suddenly realized that one guy went to prison for taking drugs and the other guy was legally getting soldiers hooked on them. So who was the enemy in that war? 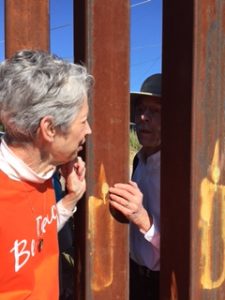 I’m glad that we moved to Nogales last year. I would hope more of you will attend next year, since we need to continually give good witness to the need for justice in our country, and, as far as I can see, this is a very good way to do it. We know we gave encouragement to the Indian natives and Mexicans in the area. The Bishop of Nogales, Mexico, celebrated Mass for the young 16 year old who was killed, through the wall, by an American border agent. So far, the parents have received no justice from the USA. I guess that means we can shoot Mexicans through the wall whenever we want. Please get involved and attend next year, if possible. The people we meet, the music, puppetistas, the diversity of brothers and sisters, etc., also make the SOAW gathering a wonderful celebration of hope.

7 responses to “Justice at Our Borders: Past Reflections on the SOAW Gathering”