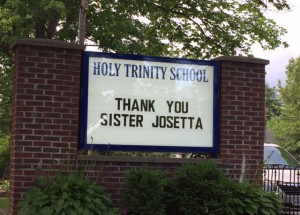 SOMERSET, OH – Sr. Josetta’s final day at Holy Trinity School was May 27 after she began her teaching career there in 1953. That’s 62 years teaching at the same school.  She taught three generations of students in Somerset, OH.

“They went and grew up on me,” she said, when realizing that she was greeting the parents and grandparents of her students.

According to a story published in the Perry County Tribune, Sr. Josetta has developed different habits over the years. She was a member of her high school band and gave a trombone recital at a graduation ceremony at Notre Dame. She worked with the poor, gathering clothing donations to distribute in Corning; she serves as director of the Holy Trinity adult choir and in several committees including the alumni committee. “I won’t have trouble finding a job,” she joked, although Sr. Josetta always took her role as choir director seriously.

“If during practice she doesn’t like what she hears, we would know by her facial expressions,” said choir member Ann Morrison. “I look for a very specific sound,” explained Sr. Josetta. 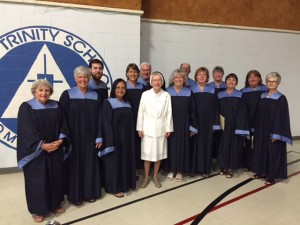 amily,” Morrison says. “And Sr. Josetta is the rock of the choir. She picks beautiful music and she wants it to sound beautiful.” “If you are singing to the Lord, really you are praying twice, that’s from St. Paul,” said Father Carmody.

And she always would say, “I want to her your D’s and T’s,” said Morrison. “She would stress proper enunciation.”

“There is a kindness in her approach to her students,” said Father Carmody. “She doesn’t raise her voice to the kids. She visits parishioners who were sick or homebound. She is very active in the ministry.”

Students and staff at Holy Trinity gave Sr. Josetta farewell gifts during an assembly held the last day of the school year, with a photo blanket and a donation of $450 to the missions, another of the Sister’s hobbies.

In a letter to Fr. C 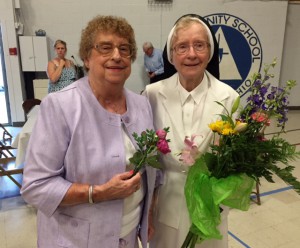 armody, Sr. Margaret Ormond, OP, Prioress of the Dominican Sisters of Peace, said, “I am deeply grateful for the love and respect the people of Somerset, and especially Holy Trinity parish, have always offered Sr. Josetta and our Sisters. We know that you will continue to support her with your prayers, letters, and phone calls.”

She retired to the Dominican Sisters of Peace Motherhouse in Columbus. No doubt to share her gifts with the community there.