OK, so I had another morning when I had to go out and clean out the crape myrtle leaves from my car’s trunk and around the windshield. Every morning? Really? And if you do not clean out the leaves and gunk, there will be a dark residue forming that makes you think the car is corroding.

But have you ever seen a crape myrtle in bloom? There is a very, very faint scent to the flower and it does not last long. There are white crapes, red or rose colored ones, and sometimes a deep ruby colored flower. Being upset with nature or enjoying the fruits of its growth, which defines you?

We are living in a world that really needs to come to terms with Mother Nature and accept that there is little we can do to stop the natural activity all around us.

We have certainly tried to defy nature. We have built dams; we have built housing developments on flood plains; we have continued to deplete the forests and the wetlands. But we are still foiled at every turn. Why can’t we predict earthquakes? Why can’t we control the hurricanes and tornadoes? Why are forest fires burning out of control? Why are there bears in people’s backyards? Is there really such a thing as warming on a global scale? 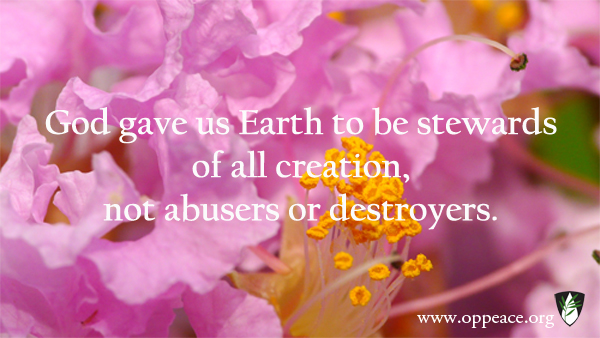 During June of 2015, we had a summer camp for boys here at the Peace Center [in New Orleans] and one of our trips with the gang was to the Aquarium. After the trip, we discussed things and asked them why we even had aquariums. They told us it was because some of the fish and animals had nowhere to live outside anymore. They told us that some of the animals could only be found in aquariums anymore. They told us that they were glad we have aquariums because some of them figured out they might never have seen these creatures anywhere else. Then the conversation really took off, and they decided the same thing would be true of zoos and insectariums. Could the creatures be safe anywhere else?

In his encyclical “Laudato Si,” Pope Francis has not told us much we did not already know, and he puts it in very straightforward language. God gave us the earth to be stewards of all creation, not abusers or destroyers. How can we live in partnership with the rest of the natural world?

7 responses to “Nature: Can We Live with It?”