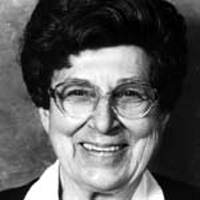 In 1963, Sr. Matilda earned a Bachelor of Science in Social Science from Siena College (Memphis, TN). She taught elementary school for several years. She worked as a secretary at Ohio Dominican College (now Ohio Dominican University), the Catholic Conference of Ohio and Mohun Health Care Center. After studying in the Clinical Pastoral Education Program at Riverside Hospital, she became the Administrator of Immaculate Conception Parish Residence for the Elderly (Columbus, OH). She ministered at Good Samaritan Hospital, (Zanesville, OH) and was a Hospice Volunteer for Mt. Carmel Hospice (Columbus, OH). She worked as a Montessori Aide at St. Mary of the Springs Montessori, Chaplain at the Heart of Ohio Hospice, and Coordinator of Peruvian Sales for the Dominican Sisters. From 1996 to 1998 she was on the staff of the Spirituality Network. In her retirement years at the Dominican Sisters of Peace Columbus Motherhouse, she designed greeting cards with dried flower petals, giving the proceeds from the sales to the missions.

Sr. Tilly chose these words from the Gospel of Matthew for today: “I give praise to you, Father, Lord of heaven and earth, for although you have hidden these things from the wise and the learned, you have revealed them to simple people. No one knows the Son except the Father, and no one knows the Father except the Son and anyone to whom the Son wishes to reveal him.”

Even in her early years, when she knew very little about God, Tilly was impelled to pursue God with determination, defiance, even belligerence – and, ultimately, with fierce love.

Tilly lived a cruel, difficult childhood with little love and no instruction about God. Her parents came to the US from Lithuania. She was born in Massachusetts, and her parents then returned to Lithuania. A few years later, her mother left Tilly’s father and came back to the US with her two daughters, settling in Florida. Tilly’s mother married several times, and Tilly grew up working very hard and with no religion.

As a child, the evil actions of others affected her in sad and destructive ways. She had no way to make things different or better. She managed to earn an honors diploma in high school, but no one came to her graduation. On her 18th birthday she was thrown out of the house and forced to fend for herself.

The only way we can understand her pursuit of God is to acknowledge that God had first chosen her in a very special way and was drawing her, pulling her to Himself, convincing her that she was indeed loved and lovable.

In the Book of Wisdom, we read: “For, if to others, indeed, they seem punished, yet is their hope full of immortality. As gold in the furnace, God proved them and as sacrificial offerings he took them to himself.”

Tilly’s life held suffering but also the promise of the complete trust she could have in Christ. And with pure GRIT she tried to follow this call.

After a destructive Florida storm, when almost everything was destroyed, Tilly opened the drawer of a sewing machine cabinet and found her baptismal certificate. She did not really understand what it was, nor did she recognize her real last name, the surname of her real father.

Because her brother had already joined the Navy, she did, too, serving in the WAVES. While in the Navy, she approached the chaplain to pursue becoming a Catholic. The chaplain was probably very busy so he gave her a book, which she read thoroughly.

Upon leaving the Navy, she went with a WAVE friend to Kingsport, TN. This friend was taking instructions in preparation for her marriage to a Catholic. Tilly took instructions as well and joined the church. She confided in the priest that she wanted to be a Sister. The priest had a serious speech impediment earlier in life, and one of the Dominican Sisters from Nashville had helped him to correct it. He admired the Dominicans so he sent Tilly to Nashville.

In 1950, knowing almost nothing about Sisters or convent life, at the age of 31 she entered the Dominican Sisters of St. Cecilia. There she met Sr. Cyrilla Zarek, a novice at the time, who would become her lifelong friend.

Through all the years of her life, Sr. Tilly took every opportunity to know and serve God. Her energy was amazing. I was most grateful to her for her work with selling the handcrafts from Peru. She filled orders, traveled widely to sell the tapecitos, and made it possible for Peruvian women to earn money for their families.

In the Book of Wisdom, we read: “Those who trust in God shall understand truth, and the faithful shall abide with God in love, because grace and mercy are with his holy ones.”

May Tilly now be with the God she loves so fiercely!

Sr. Matilda was preceded in death by her parents Bartholome and Anna Antanas Vaitekaitis, her sister Julia Gibson, and her brother Ernest Schnider. The wake and funeral Mass were held at the Dominican Sisters of Peace Columbus Motherhouse on April 4 and 5, 2016, with burial at St. Joseph’s Cemetery, Columbus, OH.