Uniting in Love for the Common Good

On January 16, Michael B. Coleman, former mayor of Columbus, OH, spoke at the 32nd annual Dr. Martin Luther King, Jr. Breakfast. Mayor Coleman stressed the importance of uniting in love and commonality to work toward the common good of our communities. He also said, “stop whining, start winning.” Yet he didn’t speak in terms of personal victory or individual advancement and winning, rather, he explained that when communities come together, that’s winning, when individuals engage in peaceful dialogue, that’s winning, when we lift up the marginalized in our society, that’s winning.

The idea of winning is woven throughout our society. We often desire to win, to stand out as “the best,” and to appear independent and strong. Yet Mayor Coleman’s idea of winning makes us reconsider what media and the world views as winning. When we transition from personal advancement to community involvement, we can all begin to win. It was a powerful and moving example of the common good.

Circling the City with Love 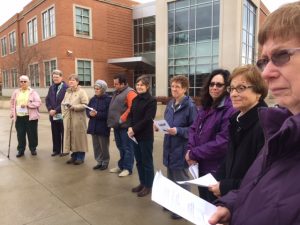 Dominican Sisters of Peace and Associates joined with students, faculty and staff at Ohio Dominican University and members of Albertus Magnus College gathered in what was called “Circle the City with Love.” This event brought together members of the community in thoughtful prayer and reflective silence for our government, for civility, and for peace. These groups participated in Mass together, a prayer created by our Peace and Nonviolence Committee, as well as a time to view the Inauguration together with time for reflection and discussion together if they wished.

While joining in prayer, these groups (as well as our Motherhouses who hosted events and prayers) were creating a force for good, one that is powerful and capable of winning against injustice and against hate. Thanks to all who participated or prayed with us from afar. Together, united in love, we can come together and win for peace!