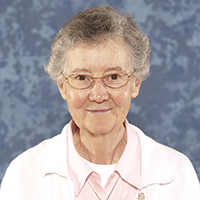 Sr. Martha earned a Bachelor of Science in Education from the College of St. Mary of the Springs, now Ohio Dominican University, and a Master of Arts in History from the University of Notre Dame.

Her first 24 years of ministry were spent educating elementary and high school students in Ohio and New York, meeting the challenge of teaching social studies and religion to adolescents during the turbulent 60s and early 70s.

For the next nine years, Sr. Martha shared her gifts and talents by ministering to the sick and elderly, first at Mohun Health Care Center and later at St. Thomas Aquinas Parish in Zanesville, OH. She saw these years as a “way of preaching God’s love,” but she acknowledged that “…the most satisfying and interesting” ministry was her retreat work because she loved “…working one-on-one with people and being a witness to the wonderful miracle that God continues to work in people’s lives.” She worked as Spiritual Director and Retreat Director at the Bon Secours Spiritual Center in Marriottsville, MA, for a total of 24 years. In this ministry she had frequent opportunities to use her artistic abilities to create a prayerful atmosphere with art, music, clay, and dance.

Sr. Martha retired in 2015 and, shortly afterward, became a resident of Mohun Health Care Center. There she offered to give piano lessons to any resident or staff member who wanted to learn to play and also conducted Qigong exercise sessions to help residents deal with their pain. She never lost her gentle manner or her concern for others, always directing her attention to her visitors and not focusing on herself.

In her preaching at the funeral Sr. Mary Faith Geelan, OP, said:

Today is the feast of the Dominican St. Vincent Ferrer, the very name Sr. Martha received at her investing. Over the past several weeks, Sr. Martha had been in and out of the hospital several times. During that time she had a recurring dream. In the dream she saw herself traveling up a hill along with several other people, but she kept hearing the voice, “It is not time yet.”

Early last week, Martha began hearing a different response. She shared with her sister Barbara, her caretakers, and friends that she felt the end was nearing.

For this funeral Mass Sr. Martha chose the passage from the Gospel of John, Chapter 9, verses 9-15. “Every branch that bears fruit he prunes to make it bear more fruit.” Martha knew that verse was certainly true and necessary in order that she might be able “…to love one another as I have loved you.”

Only Martha knows all the prunings that took place in her life so that she might love as she was loved. God called her to leave her family home in September of 1949 at the tender age of 18. Her father had died the previous January, and her older brother, senior to her by 10 years, had already left the family home. This left her younger sister and her mother alone in the household.

All of the “prunings” Martha received enabled her to bear much fruit. I remember when she was a teacher at Mary Immaculate School in Ossining, NY, an all girls school, where she taught history and religion. Way ahead of her time she created a humanities program. As part of that program she took the girls to Sing Sing Prison, not far from the school, wanting them to see what prison life was like. Not all her ideas gained acceptance, however. She also wanted to take the girls to be a part of a march in Washington, DC, to highlight the plight of the poor – this was too much for the girls’ parents so the trip to Washington did not happen.

Martha’s flowering continued during the several years she spent empowering others as a spiritual companion, preaching retreats, accompanying others on their spiritual journey, and, like the artist she was, opening others to creative ways to pray, expressing the groanings of their hearts using the entire body, mind and spirit.

One of Martha’s  last “prunings” was her decision to leave Maryland to come to Columbus and to Mohun. Martha continued to share the fruits of her prunings here through the healing power of music and the prayer body movements of qi gong. She was so aware of God’s love for her that she continued, even as her body was failing her, to shower her love on others. Several times during these past days I witnessed Mohun staff members and caregivers thanking her for all that she had done for them.

One of her last requests  was to have the following quote on her memorial card and funeral program: “I need simply and only to wait upon God without expectation, and God, all longing, resting in me, will breathe in me the music of my soul.” (Edwina Gateley)

Sr. Martha was preceded in death by her parents, Paul and Theora Wagner Starrett, and her brother, Paul W. (Bill) Starrett. She is survived by her sister, Barbara Starrett.

A Vigil of Remembrance Service and the Mass of Christian Burial were held on April 4 and 5 at the Dominican Sisters of Peace Motherhouse in Columbus OH.