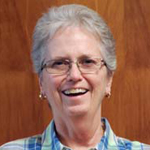 Dominican Sister of Peace Iliana Valdes (73) died May 16, 2017 in Albuquerque, NM. She was born in Havana, Cuba in 1944 to Carlos Valdes Cartaya and Carolina Peña. In Cuba, she attended the American Dominican Academy, a school sponsored by the Dominican Sisters of St. Catherine de’ Ricci. Sr. Iliana said, “I volunteered with the Sisters to minister in the poorer areas of the city. This instilled in me a love for the poor and the grace that comes with ministering to and with them.”  When Fidel Castro took power, 15-year-old Iliana and her younger sister joined thousands of unaccompanied minors brought to the United States through Operation Peter Pan, a program created by the Catholic Welfare Bureau. The two were placed in an orphanage in Washington, DC. After her graduation from high school, she entered the Dominican Sisters of St. Catherine de’ Ricci, now the Dominican Sisters of Peace.

Sr. Iliana earned a certificate for retreat work from Retreats International and a certificate in spiritual direction from Saint Joseph’s Center in Albuquerque, NM.

Sr. Iliana ministered at Dominican Retreat Centers in Miami, FL and Albuquerque, NM from 1967 to 1988. Then she moved into ministry with the poor and with farm workers in Florida. She called the farm workers she served “God’s chosen people” and added, “I didn’t minister to them. They ministered to me.”

After dealing with kidney disease for many years, Sr. Iliana received a kidney transplant in 2000. Speaking of that experience, Sr. Iliana said, “The gift of new life was given to me, and, although I have never been able to thank the donor family face to face, they are forever in my thoughts and prayers. It is indeed a gift, and each day is a blessing. We must always encourage others to give generously even to the end.” After the transplant she worked to motivate others to consider organ donation.

From 2008 until her death, Sr. Iliana volunteered at parishes in Albuquerque, NM.

In her reflection at the funeral Sr. Lucy Vazquez said:

“We believe and so we speak, knowing that he who raised up the Lord Jesus will raise us up along with Jesus and place us in his presence…..”  It could well be that this simple phrase in the Second Letter to the Corinthians is a precursor of our bringing to others the fruits of our contemplation.  We believe, we contemplate, we study, we reflect, and, out of that belief, study, reflection, and contemplation, we speak, we share with others, we preach.  When all is said and done, that is what our Dominican lives are all about, and that is what Iliana’s life was all about.  Those of us who knew her well know she was a prolific speaker. We also know that her words were grounded in her belief, and so was her life.  Her final illness silenced her speech, but it could not silence her life.  At the end, when she was connected to tubes and medications, she still knew in her heart of hearts that all that was left was for her to give herself over completely to the God who loved her and whom she loved so much.  Once the decision was made to disconnect the machines, she was able to “speak” her final words of peace, because she was at peace with her God.  Iliana’s belief, indeed, was that the God who raised Jesus was now ready to raise her, that God’s promise to her had not been in vain.

Iliana chose the frequently read Matthean Gospel passage of the Beatitudes. “After he had sat down, his disciples gathered around him, and he began to teach them….”  Iliana was not a scholar, but she was a quick learner.  For her the Beatitudes were not a matter of theology or Scriptural exegesis; they were a matter of belief and action.  She learned the truth of the Beatitudes very early in life.  When Jesus tells us that we are blessed when we are poor in spirit, sorrowing, lowly and hunger and thirst for justice, when we are merciful and are peacemakers, he also assures us that we should be glad and rejoice for our reward is great in heaven.  Iliana’s faith and commitment were simple and straightforward.  She could identify with the sorrowing, with the lowly, and with the singlehearted for, from the time she was a child, back in our beloved Cuba, she experienced illness and its consequences. When she was a teenager, she had to leave her parents, her grandmother, and her homeland and adapt to a different language, a different culture and a different country.  For the better part of her religious life she experienced multiple illnesses, finally needing dialysis followed by a kidney transplant.  Yet, Iliana knew that the “Blessed” of the Beatitudes means not just blessed, but also happy and joyful. In the midst of all her health issues, she was blessed and happy.  She accepted what came her way with peaceful equanimity.  She was actually peaceful before she ever was a Dominican Sister of Peace because she was secure in God’s never-failing love.  As we celebrate Iliana’s life and commit her to her God, we ask that we, too, be granted the blessings of the Beatitudes.

Sr. Iliana is survived by her sisters, Maria Carlota Valdes and Dania Goicoechea, as well as nieces and nephews.

The Vigil of Remembrance and Mass of Christian Burial were celebrated May 23 and 24 at Risen Savior Catholic Church in Albuquerque, NM.  A Vigil and Memorial Mass were celebrated at the Dominican Sisters of Peace Motherhouse in Columbus, OH on May 31 and June 1. Burial followed in St. Joseph Cemetery. Memorial gifts in Sr. Iliana’s memory may be submitted securely online or mailed to the Dominican Sisters of Peace, Office of Mission Advancement, 2320 Airport Dr., Columbus, OH 43219.