It could have been a disaster. One word would have corrupted the project. But it didn’t happen – thanks to an honest conversation.

Last year, I wrote a children’s story featuring female white squirrels and the life skills the mother teaches her daughter. All generations of these albino squirrels were called Whitey. The story itself is not flawed; however, the original title was. You see, I had called it “Lessons from Whitey.”

During a massage with Adrienne, my African-American therapist, I mentioned the story and its title. I noticed a definite change in touch when I said the word “Whitey.” I immediately told her to stop and to tell me what had just happened – and yet, I already knew because something also changed for me. She knew that the title was based on the name of the squirrels, and still found it to be very offensive to her and to all African-Americans. And so, we talked. It was an in-depth and wonderful conversation about racism.

“If you were to see this title in a bookstore or library, what would you do?” I asked.

“I wouldn’t touch it, let alone open it, and would probably ask the owner or librarian why they had the book in their children’s collection,” she answered. 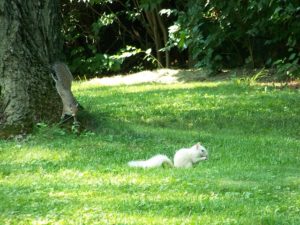 Instantly I had the new title: “Lessons from Mama.“ “This title would pique my curiosity about the lessons Mama had to teach. I would definitely check it out,” she said excitedly. I gave her the manuscript to check for any other possible offensive or confusing words, and happily, she found none. It’s interesting that I had been questioning the title for several months, feeling that it might be greatly misunderstood. Adrienne confirmed my suspicions. “Lessons from Mama” was saved!

We often talk about the power of words. They can build up or tear down; they can reveal or conceal; they can offer hope or intimidate. It’s why we have to choose our words carefully. We make choices with our words – and I chose to change ONE word, which has made all the difference.

Lessons from Mama will be available from SisterRosiesBooks@oppeace.org in March 2019.

8 responses to “The Power of ONE Word”