Many of you are aware that after the murder of George Floyd, the congregation launched an effort to condemn racism and brutality by the police, by publishing a statement from the Leadership Team and also by promoting the display of a yard sign that read: Racism is a Sin. Period.  These signs were distributed all over, to our motherhouses, ministries, private homes, and many other places around the country.

Some of them were stolen, right off the lawn, and I wondered about that. Was it because someone really wanted to display the sign, sharing our feeling that this was something that we all need to address? Or, were some of them stolen, as a way to quash the message.  I’ll never really know. I tend to think people wanted to use them.  But then that’s stealing. Maybe we needed a sign that read Stealing is a Sin. Period.J

But now that seems to have subsided and our remaining signs stand as a continuing reminder. A moral reminder of an immoral thing.

Since then, I had the opportunity to read and listen to Fr. Brian Massingale, a theologian at Fordham, who 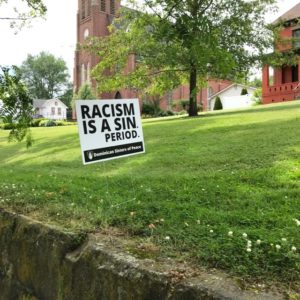 has written extensively on white privilege. Being an African American man himself, his words hold a special credibility for me, and I have felt a kind of breaking through in a way I haven’t before. I owe a debt of gratitude to him for his wisdom and his kind way of holding up to white people what we most need to hear.

Father Massingale reminds us that rarely– if ever– are young white men arrested or run down and murdered for jogging through a neighborhood or walking down the street, or for going into a store to buy some candy, or even for selling cigarettes illegally on the street.  This does not happen to white people.  Black people are murdered every day and the perpetrators get away with it. The list is too long.

Fr. Massingale talked about the time he went to substitute in a parish to celebrate Mass and the people there asked, “Where is the priest? You can’t be the priest, you’re black.” This is part of the breaking through for me, not that I did not know this existed before, but now I cannot blow it off as the foolishness of stupid people. “You can’t be the priest, you’re black,” rings in me in a new place now. This is what black folks hear all the time. And I don’t. Being white is not a threat to my life. 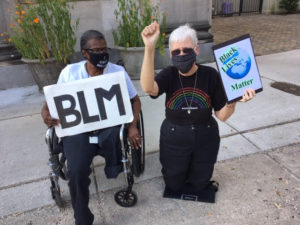 A small crack in my white armor is breaking through. I’m hoping that this is the hope that Colette Parker expressed this week in her blog. Optimism? Maybe, on some days. Hope, always. I hope that I can continue to see the experience of people of color more through their eyes and not through mine. Not possible? Maybe. But the breaking through is important for me. I hope that I can tolerate my discomfort long enough that breakthrough keeps happening and I see with new eyes.

8 responses to “Breaking Through”