“They shall beat their swords into plowshares and their spears into pruning hooks.”

“A Farewell to Arms” now has new meaning since police departments have tapped into creative ways of getting guns off the street.  For the last several years, the New York City police have seized illegal guns and melted them down, recycling the resulting metal. In a short period of time, more than 3,000 guns were melted down, a major achievement in keeping guns off the street and saving lives.  The Los Angeles County police seized 7,044 guns, melted them down and used the metal for construction projects such as bridge repair.  Omaha police seized handguns and semi-automatic weapons, sending them to a steel melting factory to be used for something positive for humanity!

The late Rev. Louis Coleman paid $20 – $25 to individuals willing to give him a gun.  In one year, he purchased 300 guns and said, “For every ten guns melted, we feel it has saved at least one life.” One of the greatest privileges anyone can have in their life is to save the life of another.

As I listened to mothers who have lost young sons and daughters to gun violence, to ministers who gather families and communities for prayer in memory of those lost, and to the voices of concerned citizens in cities and rural areas who speak of the never-ending spiral of guns, gangs, and drugs, I think of those who are attempting to change the script.  Although the guns melted down around our nation represent a small fraction of guns in the United States, I believe this action has saved lives. 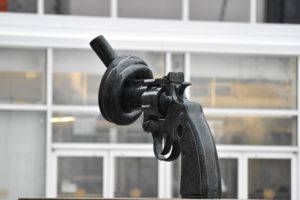 Many politicians have become tone-deaf to the cost of inaction on gun violence. They continue to do the bidding of the NRA and gun manufacturers, so responsible, common-sense legislation such as universal background checks, banning of military-style assault weapons, and red flag laws languish in the Senate.  The empty words of “You are in our thoughts and prayers,” with no resolute action are an insult to survivors.

When I view crosses and flowers in neighborhoods around the city and watch memorial prayer services in person or on television, I hope that one day, barriers to responsible gun legislation will melt down, political posturing will melt down, and misinterpretation of the second amendment end in a meltdown.

I feel a deep sense of gratitude to all the Louis Colemans around the country who have allowed creativity to overpower discouragement in the ever-present reality of gun violence.

7 responses to “Time for a Meltdown?”