This article is the first of in a series of twelve, one per month, celebrating the Bicentennial of Dominican Women in the United States.

St. Dominic was a traveling friar who shared his deep contemplation of the Gospel with others through his preaching. His Order of Preachers (OP) was formally designated by Pope Honorius III in 1218. Dominic wanted the friars, and soon the sisters of the order, to preach the truth of the Catholic faith. By his example, men and women Dominicans live in community and preach through their active involvement with others.

In the early years of our nation, many Catholic families migrated to Kentucky from Maryland in the late 1700s, and most settled in areas where they could continue to practice their faith. Central Kentucky became known as the new Holy Land as Catholic monasteries, convents, and schools sprang up around the area. By 1798, the little log church of St. Ann in Washington County was established. The parish quickly grew too large for this building, and on Christmas Day 1809, Dominican Fathers Fenwick, Wilson, and Tuite, blessed and opened a much larger brick church, St. Rose of Lima, just two miles away.

St. Rose of Lima provided spiritual care for twenty-three hundred souls and became the cradle for Dominican Friars in the United States. These friars founded the first seminary in the United States, a school for boys, the first Catholic college west of the Alleghenies, then turned to women to join the mission of the Dominicans.

In February 1822, Father Wilson invited young women to form a community of Dominican Sisters; nine women became candidates. On Easter Sunday, 1822, seven of these women, including Mariah Sansbury, who took the religious name Angela, were formally received into the Order of Preachers. Angela Sansbury was the first woman in the United States to receive the habit, and she, like those others who entered religious life that day, was part of a group unique in the Dominican order. These Nuns were not cloistered behind convent walls like their Sisters in Europe but called to lead active lives in their community and share the mission of the Dominican Friars – to respond to the needs of the world and the time.

In August, six more women joined the order. Their first mission would be to follow the prayer schedule 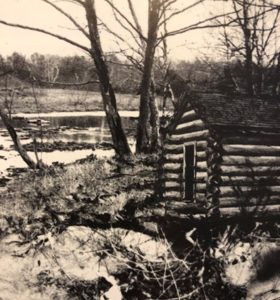 of the friars and instruct girls. These pioneer women began their lives as Dominican Sisters in a log cabin named Bethany on the grounds of the Saint Rose Farm belonging to the Friars. This new community took the name of the Convent of St. Mary Magdalen, and Father Wilson appointed Judith McMan, a married woman from Cork, Ireland, as superior over the first candidates.

It was soon after that the Sisters moved to the Sienna Vale, near Cartwright Creek. Angela Sansbury and her blood sister Elizabeth, who entered religious life with the name  Benven, were the beneficiaries of their mother’s estate, which of course was passed on to the Community. These assets included land, a large log cabin, a still house, and farm animals, which the Sisters raised to help support the fledgling Congregation.

One response to “In the Steps of St. Dominic: The Founding of Dominican Women in the United States”