We Have the Power to Redeem the Soul of America

COVID-19 has laid bare the systemic oppression that is at the root of inequality in America.

Civil unrest has highlighted what Black and brown people have known (since forever): that we have been historically denied constitutionally guaranteed rights, on the basis of the racial construct.

If you’re anything like me, you may have found yourself trying to figure out how you can move the needle toward (what seems to be the ever elusive “thing” called) racial justice. Some are still searching for a way to make a positive difference. Some are still wondering if they CAN make a difference.

I say to you: Yes. You CAN!  As a source of motivation, I offer these words from the late Congressman John Lewis (written shortly before his death and published in The New York Times on the day of his funeral, July 30, 2020):

“Ordinary people with extraordinary vision can redeem the soul of America by getting in what I call good trouble, necessary trouble.”

The question now is: Are we willing to do the work?

Are we willing to admit that the declaration of our country as a beacon of freedom (a nation where there is equal justice for all) is a lie?

Are we willing to admit that the forced removal of indigenous peoples and the institution of slavery marked the beginnings of a system of racial injustice from which our country has yet to break free?

Are we willing to admit that deep-seated systemic inequities that disadvantage people of color are still woven into the fabric of our institutions?

Acknowledging these truths are necessary, IF we are serious about dismantling systemic racism and working to repair centuries of harm inflicted on an oppressed people.

As more Americans are awakening to how systemic racism has cheated generations of Black and brown children and as our nation experiences this racial justice reckoning, it is up to us – ordinary people with extraordinary vision —  to create the “more perfect union” that ALL Americans deserve. It is up to us to create a future of harmony where everyone can benefit.

We can start by heeding Lewis’ instructions: vote and participate in the democratic process; study and learn the lessons of history and accept that the truth does not change; continue to build union between movements stretching across the globe; put aside hatred; stand up, speak up  and speak out, when you see something that is not right.

Together, we “can redeem the soul of America by getting in … good trouble, necessary trouble.”

I’m trying to be civil, but it is becoming increasingly difficult.

I’m sorry – not sorry – that if one more (white) person tells me that navigating this issue of systemic racism is exhausting and uncomfortable, I may “lose my religion” (you can ask one of your southern friends to translate, if you don’t know what this means).

Please be assured that your discomfort does not mean that you are in danger. And it can’t begin to compare to the “discomfort” (which could be related to actual danger) that Black and brown folks experience each and every day. And don’t even get me started about the exhaustion.

Anyway, while I pause to restore a little decorum, I have given some inquirers a few things to ponder/research:

And if that isn’t enough, help me answer this question: Why do white folks want to jump over the hard personal work of mitigating the impact of white supremacy to get to (half-baked) “solutions”?

The days of COVID-19, with its related “Stay Healthy at Home” directives, have left me with time to reflect, read, and pray differently. Mostly, the time is bringing me to questions and few, if any, answers. 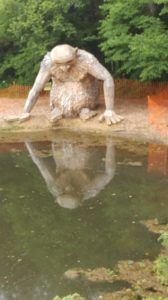 In the early days, God presented me with an image of a disco ball. My dialogue went something like: “really a disco ball! — a reminder of flashing lights, dance floors, social gatherings. We are in the midst of a pandemic when all of those fun things are not options.” I prayed that the image would just dissolve, but it hasn’t.

This past week, I visited Bernheim Arboretum and Research Forest (in Clermont, KY) and spent time with Nis (one of the Bernheim Forest giants built using recycled wood from the region).  Nis sits at the edge of a pond and is glancing in, seeing his image reflected for the first time. I finally got it! Nis sees himself and only himself and that image is the same one he sees every time he looks (barring changes in the water). My disco ball also presents a self-reflection; but rather than one, it provides many every changing ones.

So what does this have to do with anything? To me, it feels like the journey. I, like many other white-skinned people, have begun again in the last few months as issues of police brutality have light shown on them; as the deaths and significant illness related to COVID-19 reflect disparities based on skin color; as the education system as we have known it comes to an abrupt stop with its replacement form, impacting the poor and — most often — students of color significantly. For me, it means looking at all the facets of the disco ball and seeing all of me.

The first thing I needed to confront is my arrogance. I was in high school and college when the last “big” civil rights movement took place so I thought I understood race relations and equality of all persons. I have a biracial cousin so I thought I accepted blackness in my family circle. Professionally, I often chose to work in the black sections of town, meaning I drove down streets that often made the news because of the violence that occurred on them the night before. I go to lunch with my black co-workers not really thinking about them as different from me. I worship with a community that is the most culturally diverse in the city.  I am arrogant — I think I understand what it is like to live in skin that is not white.

My one-dimensional view really has been unraveling for a couple of years, starting with an innocent comment I made to a woman of color: “I really don’t see color.” The response I received was: “Then you don’t see me.” This short interaction became the first of many facets in my disco ball reflection. Most importantly, it freed me to ask questions and seek insight.

My father is from Virginia, so I have spent endless hours touring plantations and battlefields, seeing the monuments to heroes of the confederate south. Names like Stonewall Jackson, Jefferson Davis, Robert E. Lee have been part of my vocabulary from a very young age — how did I not know that the Civil War was about more than a dispute between states?

I still struggle with my understanding of slavery. My family’s immigration history starts in the 1900s, so we don’t have direct experience with it. This, coupled with my seeing  “black help” being much loved when I moved south, prevented me from seeing the pain still being inflicted in current times.

Why did I never wonder what it was like to live in black skin? What was it like when they went home? How do I understand my feelings, as I sat with a group of high school girls as they processed the death of a friend and I could not understand their vocabulary or speech patterns?  How do I say to them: “Can you tell me more so I can understand?”

The world of education has been my professional focus — I wonder what the impact has been of my school system’s middle school for students of color with its Afrocentric curriculum? — when/how will the rest of the students get a different view of history?

And I ask myself would I rather be called racist or privileged? Can I acknowledge the fear I experience when I am in loud, seemingly disorganized gatherings of mostly folks who don’t look like me? When I am sharing my financial resources, am I willing to risk and trust that they will be used for good? Can I be vocal enough to say publicly that my white standards are not the only ones that are appropriate? Can I keep risking to ask questions like what is a Green Book or what does a reference to a watermelon imply? Can I risk knowing I don’t know? Can I live with the discomfort of shifting my beliefs?

In the midst of the unrest in the country, I often find myself saying: “Just tell me what you want me to do.” Slowly, I am understanding that would be the easy way out; it would not change my heart.

But I still have more questions: If George Floyd’s painful death had not been played and replayed so often, would Breonna Taylor’s name ever been a part of the conversation? I wonder: is the nation’s outrage about the brutality allowing us to forget the other areas where suffering occurs? Is access to health care, education, employment, just and equal wages being forgotten. How do I keep asking myself the hard questions and be willing to sit with the discomfort?

My disco ball keeps spinning. It keeps asking me to see me in every changing reflection. It keeps challenging me to seek to understand and to ask myself in the words of Resmaa Menakem : “Can I commit myself to the long road ahead?”

I need to say this:

Race has been used to divide and separate people for millennia, but the concept of race has no genetic or scientific basis.

We are one human race. Our species, Homo sapiens, evolved in Africa.

Although the concept of race science – this idea that humankind is divided into separate and unequal  races – has been debunked, race still determines people’s perceptions, opportunities, and experiences.

Race is a human construct, used to perpetuate the notion that white people (who descended from Africa) are somehow superior.

We have been here before.

I’m hoping this time will be different.

I’m hoping this time we can be honest.

I’m hoping this time we can confront the ugliness of who we are as a nation.

I’m hoping this time America is willing to acknowledge the lies it tells itself about race.

I’m hoping this time the cries of the oppressed will be heard.

I’m hoping this time we can get rid of the idea that white lives matter more than others.

I’m hoping this time we will embody and practice justice.

We have been here before.

If we fail this time, what will history say about us?