Is Domestic Terrorism the New Normal?

Is there such a thing as the calm after the storm?  After having witnessed thousands of domestic terrorists storm the United States capital, with the lives of former vice president Pence and Speaker Pelosi being threatened and five people dead, I had hoped that calm would prevail after the dust settled.  No such luck.

Homeland Security has just issued a domestic terrorism warning: “Information suggests that some ideologically-motivated violent extremists with objections to the exercise of governmental authority and the presidential transition, as well as other perceived grievances fueled by false narratives, could continue to mobilize to incite or commit violence,” the bulletin said.

In plain English, American political extremists, excited by lies spread by the former administration and fed by current members of Congress, have become an active threat to our nation.

This is not a poorly written play; this is our new reality, with no final act in sight.  I was shocked to see a large crowd in Wyoming (unmasked, of course), listening to Rep. Matt Gaetz call for removing Rep. Liz Cheney from office for her vote to impeach Donald Trump.  I am always impressed by someone who follows her/his conscience in making a decision. It appears Rep. Gaetz is not.  This vote may cost her life, as threats abound.

Some members of the House of Representatives are now wearing bullet-proof vests.  Rep Greene of Georgia carries a gun, and is best known for her violent rhetoric.  A few years ago she called for the execution of Nancy Pelosi and then-President Barack Obama; another Congressperson has asked to have her office moved away from Greene’s after an ugly confrontation over mask-wearing.

The national guard remains in place near the capital and a seven-foot fence continues to serve as a reminder of the ongoing fear of more violence.  Where does that lead us?  How do we “be peace, build peace and preach peace” in this never-ending arena of vitriol and violence? 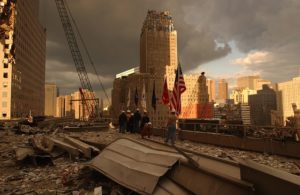 The answer is not to remain silent.  Many people tiptoe around all things political.  Isn’t there such a thing as respectful dialogue?  No one wants to lose a friend or have strained family relationships.  However, our voices need to be heard.  Minority leader in the House Kevin McCarthy needs to hear from us about the violent rhetoric coming from Rep. Greene.  She serves on the education committee even, though she called the massacre of 20 children and six teachers at Sandy Hook a “hoax,” and the massacre of 17 students at the Stoneman-Douglas High School in Florida “overblown.”  She also stalked one of the students who was meeting with his representatives in Washington.  Your senators also need to hear from you before the vote of conviction of Donald Trump.

Dr. Martin Luther King, Jr. was asked what he thought needed to be done to end racism, and he responded that the greatest obstacle was the silence of good people.  Silence allows violence, injustice and racism to continue.  Silence is not acceptable.  No one is too busy to lend a voice.  Catherine of Siena would say Amen to that.