Join Dominican Sisters of Peace as we strive to bring PEACE and justice to our world in this post-truth era. Each week, our Justice Promoter will share important information (including action alerts, prayer opportunities and much more) that will help you to spread peace in your own local community and our world at large.

A Kansas woman was executed Wednesday, the first time in nearly seven decades that the U.S. government has put to death a female inmate.

Lisa Montgomery, 52, was pronounced dead at 1:31 a.m. after receiving a lethal injection at the federal prison complex in Terre Haute, Indiana. She was the 11th prisoner to receive a lethal injection there since July when President Donald Trump, an ardent supporter of capital punishment, resumed federal executions following 17 years without one.

In 2015, Pope Francis addressed the International Commission against the Death Penalty, stating that: “Today the death penalty is inadmissible, no matter how serious the crime committed.” Francis argued that the death penalty is no longer justifiable by society’s need to defend itself, and the death penalty has lost all legitimacy due to the possibility of judicial error. He stated that capital punishment is an offense “against the inviolability of life and the dignity of the human person, which contradicts God’s plan for man and society” and “does not render justice to the victims, but rather fosters vengeance”.

The Dominican Sisters of Peace have adopted a corporate stance against the death penalty, and we publish this statement from Lisa Montgomery’s attorney in protest of her unjust execution. 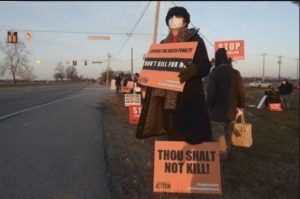 The craven bloodlust of a failed administration was on full display tonight. Everyone who participated in the execution of Lisa Montgomery should feel shame. No one disagrees that Mrs. Montgomery was the victim of unspeakable torture and sex trafficking. No one can credibly dispute Mrs. Montgomery’s longstanding debilitating mental disease – diagnosed and treated for the first time by the Bureau of Prisons’ own doctors. Our Constitution forbids the execution of a person who is unable to rationally understand her execution. The current administration knows this. And they killed her anyway. Violating the Constitution, federal law, its own regulations, and longstanding norms along the way.

The government stopped at nothing in its zeal to kill this damaged and delusional woman. After we, her attorneys, contracted COVID-19 during our travels to visit her after her execution was scheduled, the government fought tooth and nail against any delay to allow us to recover so we could represent her effectively. Then they violated the law in multiple ways in rescheduling her execution for the final days of the Trump Administration. As courts agreed Lisa’s case presented important legal issues warranting serious consideration – including whether she was competent to execute – the government hammered onward with appeals.

By insisting on an execution during a pandemic, this administration demonstrated its reckless disregard for human life of innocent citizens. Executions are super-spreader events. The government knows this. Yet, they put the lives of every single person who must participate in these “events” as well as every one of those persons’ friends, families, neighbors, co-workers, and who knows how many other people. Because this administration was so afraid that the next one might choose Life over Death, they put the lives and health of US citizens in grave danger. In the midst of all this litigation, Lisa’s request for clemency remained before President Trump. It was supported by thousands of organizations and individuals – faith leaders, anti-violence advocates, conservative leaders, international organizations, and many more. But the President did nothing. He had not even the decency to formally deny – or even acknowledge – Lisa’s clemency application, though it is hard to imagine a case more deserving of executive intervention than this one.

Lisa Montgomery’s execution was far from justice. She should never have faced a death sentence in the first place, as no other woman has faced execution for a similar crime. And Lisa was much more than the tragic crime she committed, a crime for which she felt deep remorse before she lost all touch with reality in the days before her execution. Lisa was also much more than the horrors inflicted upon her, the sexual violence and abuse she endured at the hands of those who were supposed to love, nurture, and protect her.

Lisa was a loving mother, grandmother, and sister who adored her family. She was a devout Christian who loved Christmas and created beautiful angels for those lucky enough to receive her gifts. Lisa often became trapped in the prison of her mind, losing touch with reality for periods of time. But when not gripped by psychosis, she was a gentle and caring person whom I was honored to know and to represent.

Lisa Nouri, Amy Harwell and I represented Mrs. Montgomery for eight years. We loved her very much and she loved us. She honored us with her truth and trusted us to share it in a way that not only told her story, but that could help other women.

Even though President Trump could not be the hero we asked him to be, we are here to say to every woman and girl who has been the victim of violence and degradation: You matter. Your pain matters. You are more than a victim. You are a survivor. Do not let anyone humiliate or shame you. You deserve to be loved.

In the past week, we have seen just how far President Trump and his administration will go in their disdain for justice and the rule of law. This failed government adds itself to the long list of people and institutions who failed Lisa.

We should recognize Lisa Montgomery’s execution for what it was: the vicious, unlawful, and unnecessary exercise of authoritarian power. We cannot let this happen again.

The Economy of Slavery

As shameful as it sounds, there is actually a significant portion of our economy that depends on the profits of human slavery. Click here for an analysis from the anti-trafficking organization Talitha Kum.  For more resources regarding human trafficking, click here.

There are a number of virtual events that you can attend to learn more about human trafficking and how it can be prevented. For the US Catholic Sisters Against Human Trafficking calendar, please click here.

From the Coalition of Catholic Organizations against Human Trafficking

CCOAHT’s members have developed a National Human Trafficking Prevention Month toolkit. You can also join the Become a SHEPHERD community and incorporate anti-trafficking into your ministries and activities.

Death Penalty Education
The Catholic Mobilizing Network will host Sister Helen Prejean, Krisanne Vallaincourt-Murphy – our Executive Director at CMN, and Bishop Flores of Texas at an online event entitled “Killing in our Name: Federal Executions and Pro-Life Witness.”  It is scheduled for 12:30-1:30 EST on Friday, January 8, 2021.
Here are the details and the link to RSVP.

40th Anniversary Celebration of Roses in December
Please join the Racine Dominicans for a Zoom Gathering to Share Video and Photo Highlights from the 40+ Commemorative Events from El Salvador to the USA, marking the 40th Anniversary of the martyrdom of Jean, Ita, Maura, & Dorothy on Saturday, January 16, 2021, 6pm – 7pm EST.

If you have questions about registration please contact Sister Ann Pratt OP, apratt@racinedominicans.org or (262) 898-4094.

Our Dominican Family has chosen to focus our Dominican Month for Peace. on Ukraine, a country struggling with the effects of violence and war.

UNICEF, a worldwide nonprofit organization providing relief to Ukraine, describes the situation as an ongoing challenge, especially for children: “After seven years of conflict, women and children in Eastern Ukraine remain extremely vulnerable. The conflict is taking a heavy toll on civilians: regular ceasefire violations, damage to homes, and social infrastructures lead to mine contaminations and limited access to services.”

Here are some resources that you can use to continue to learn about and offer support to the people of Ukraine.

This is a project that has had great moral as well as material impact.
BUR Friends – monthly BUR support campaign provided by people who believe in the idea of ​​the program and want to be part of it.
Support of Political Prisoners held in Russia: case of Oleksandr Marchenko

Ukrainian Political Prisoner Oleksandr Marchenko
A Russian court has sentenced Oleksandr Marchenko to 10 years’ imprisonment, despite the evidently flawed nature of the charges against him and his consistent account of torture inflicted by Russian-controlled militants in eastern Ukraine before being abducted to Russia.

Write a letter of support:

Here is a sample letter (letters must be written in Russian)

[Hi.  I wish you good health, courage and patience and hope that you will soon be released.  I’m sorry that this letter is short – it’s hard for me to write in Russian., but you are not forgotten. ]

Books on Ukraine:
Red Famine by Anne Applebaum
Bloodlands by Tim Snyder
Nothing is True and Everything is Possible by Peter Pomerantsev
Road to Unfreedom by Tim Snyder
Putin’s People by Catherine Belton

U.S. Catholic Sisters Against Human Trafficking reminds us of our duty to protect children from abuse and exploitation while online.

One way you can help protect children’s innocence and dignity this holiday season is to support the EARN IT Act, a piece of bi-partisan legislation in both the Senate (S. 3398) and the House (H.R. 8454) that will help prevent online exploitation and trafficking and hold internet service providers accountable for trafficking material shared on their platforms. You can click here to read a summary of the EARN IT Act and learn more.

U.S. Catholic Sisters Against Human Trafficking has created an online campaign that makes it easy to contact your Senators and Representatives with one of two messages: either a thank you for already co-sponsoring this important piece of legislation, or a request to join on as a co-sponsor. All you have to do is type in your address and you will automatically be connected with your legislators and the correct corresponding message.

You can also send your own personalized message to your legislators. Look up the contact information for your Senators and Representatives here.

From Everytown for Gun Safety

It’s been nearly 25 years since Congress last passed a significant federal gun safety law. In 2019, the House of Representatives passed bipartisan legislation like the bill to require background checks on all gun sales. But the NRA’s allies in the Senate refused to prioritize the safety of the American public. Now, more than 100 people are killed by guns and over 230 more are shot and wounded every single day.

In 2021, Congress must address the gun violence crisis. The COVID-19 pandemic and surging gun sales have weakened the country’s background check system, making the need for action more urgent than ever.

Read and share our new memo today to learn what the 117th Congress can and must do to prevent gun violence and fix the background check system.

Last month, we elected the strongest gun safety ticket ever to the White House. It’s never been more important to act on gun safety than it is now, and we know the Biden-Harris administration must use executive power to make that change happen.

But Congress needs to act if we’re going to fully address the gun violence crisis that has been exacerbated during the COVID-19 pandemic.

Want to learn more about what’s at stake? Read and share this new report from Everytown Support Fund to learn how the COVID-19 pandemic and a surge in gun sales have weakened the background check system.

Click here to read the December Newsletter from US Catholic Sisters Against Human Trafficking (USCSAHT), focusing on how we can use our buying power to help end labor trafficking.