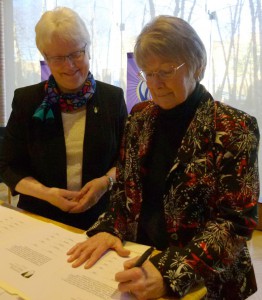 COLUMBUS, OH – Dominican Sister of Peace Elizabeth Jackson professed temporary vows of poverty, chastity and obedience on Saturday, December 5, during the celebration of Eucharist in the Columbus Motherhouse Chapel. Sr. Elizabeth affirmed that she will give witness to trust, belief and the generosity of God through her vows and then made profession for three years into the hands of Sr. Patricia Twohill, Prioress of the Dominican Sisters of Peace. Sr. Pat presented Sr. Elizabeth with the congregational pin, an outward sign of her profession, and the Constitutions of the Dominican Sisters of Peace by which she has promised to live.

Sr. Elizabeth graduated from the College of St. Mary of the Springs (now Ohio Dominican University) in 1965 and from St. Louis University School of Medicine in 1975. As a psychiatrist, Sr. Elizabeth practiced in Ohio, Massachusetts and Florida. She worked at the Department of Veterans Affairs and specialized in Post-traumatic Stress Disorder. In 2007, she became the Chief of Mental Health at the Chalmers P. Wylie Ambulatory Care Center in Columbus and then was Acting Chief of Staff until her retirement in 2012. Presently, Sr. Elizabeth volunteers at the Dominican Learning Center, a ministry of the Dominican Sisters of Peace. She is also liturgist and organist at the Columbus Motherhouse. 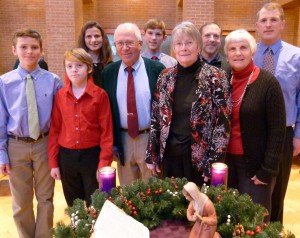 After the Mass, Sr. Elizabeth shared the inspiration she received from older women in Scripture. “As you can see, after a period of discernment over some years, I decided to re-enter religious life and was accepted,” Sr. Elizabeth said. “I am reminded today about Sarah who laughed as she received God’s word and of Elizabeth, my namesake, who heard God’s word and bore the Announcer of that Word. I hope to hear the Word as well as my namesake did and to live what the Word calls each of us to live.”

A Columbus native, Sr. Elizabeth is the daughter of J. Harry and Marian Jackson (both deceased). Prior to entering the Dominican Sisters of Peace, she belonged to St. Margaret of Cortona Church, where she served as organist from 2007 to 2015.