COLUMBUS, OH – To assist in the healing of women who are survivors of human trafficking, the Dominican Sisters of Peace and Theresa Flores, founder of S.O.A.P. (Save Our Adolescents from Prostitution), a human trafficking survivor, national speaker and writer, provided a New Beginnings Survivors Retreat for 20 victims of human trafficking from across the country. The retreat took place at the St. Therese Retreat Center (Columbus, OH), from January 1 to 3, 2016. The female attendees traveled from California, Texas, Florida, Colorado, Illinois, Michigan and Ohio and ranged in age from the early 20s to 40s.

Sex trafficking is a form of modern slavery that exists throughout the United States and globally. Sex traffickers use violence, threats, lies, debt bondage, and other forms of coercion to compel adults and children to engage in commercial sex acts against their will. Each part of the retreat was designed to lift the spirits of the women attending and gift them with positive images of themselves. 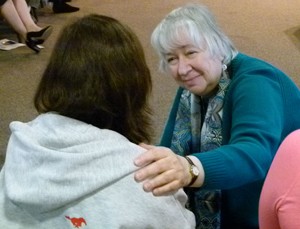 The retreat began with Washing of the Feet, an act of love led by Sr. Carol Davis, a Dominican Sister of Peace and substance abuse counselor and retreat leader from Niskayuna, NY. “I believe this retreat is important for healing,” Sr. Carol said. “Survivors can claim their voice, speak their truth and connect with others who understand.”

Maria Durant, a news reporter from ABC-6 Columbus, offered tips on how to be interviewed, especially for survivors who want to tell their story. 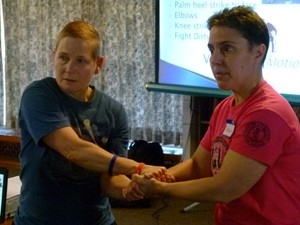 Two female Highway Patrol Troopers from Michigan, Mary Capp and Tressa Duffin, provided instruction in self-defense and nutrition. When the out-of-uniform troopers introduced themselves, some of the women initially reacted negatively. “I was often treated as a criminal by the police,” one woman said. “I’m so glad you two understand.”

Art therapists, Mary Helen Fernandez Stewart and Lyndsey Archer, (Ohio), guided the women in creating their personal LIFT books. (LIFT stands for Listen and Know, Inspires, To Fly Free and Trust.) Both Mary Helen and Lyndsey work with Hope and Liberation Coalition, which is dedicated to creating awareness and preventing human trafficking via the arts. 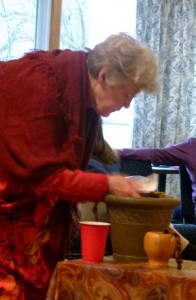 Dominican Sisters of Peace Noreen Malone, OP, introduced the women to “the Real Woman at the Well” in John’s Gospel. “From her we learn that God is not in the mountain but in our thirst. God is not in the temple but in the stream of our desire,” Sr. Noreen said.

Pastor Bonnie Laudeman, chaplain with the Investigative and Forensic Services Department of the Oakland County, Michigan, Sheriff’s Office spoke about “the Bad Girls of the Bible.” “We don’t transform ourselves God does,” she said. “We can’t forgive ourselves. God forgives us.”

Katerina Rosenblatt, PhD (Florida), participated in the retreat. Like Flores, she survived trafficking as a teen and now speaks nationally. Through her foundation, There Is H.O.P.E. for Me, Rosenblatt helps women trapped in sex trafficking.

“Trafficking happens everywhere,” Rosenblatt said. “At first, I tried to understand how God could allow these terrible things to happen to me. Now I know that God uses my life to touch the lives of others.”

Rosenblatt recalled the subtle grooming process that prepared her to be trafficked. “I was looking for love and instead I found manipulation. I want the Sisters to know how much this retreat means to me. This retreat is my freedom time! I am celebrating this new year as my time to be free from trafficking and abuse.”

Dr. Carolyn Hixson, MD (Ohio), offered health consultations to the women. She also presented a session on “Dealing with my ‘Not-Enoughness,'” noting that all of us must learn to replace our feelings of defeat and inadequacy with the truth.

Sr. Maxine Schonk, Dominican Sisters of Peace, led the women in reflecting on the topic, “What’s Your Song? Reclaiming Your Innocence.” This was followed by a drum circle.

Toward the end of the retreat the attendees were asked what they had experienced. Words such as grace, hope, mercy, freedom, compassion, relief and truth were repeated over and over. 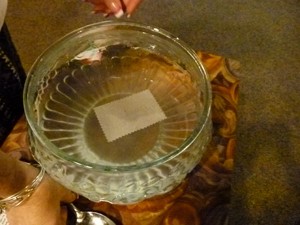 The concluding session involved each woman writing a word or phrase describing a burden she carried. She placed her paper into a bowl of water and watched it slowly dissolve away. Sisters from the Dominican Sisters of Peace then prayed with each woman individually.

As a sign of support and comfort the attendees were gifted with prayer shawls made by volunteers who prayed as they knitted them.  The women also received bibles and personal care items. 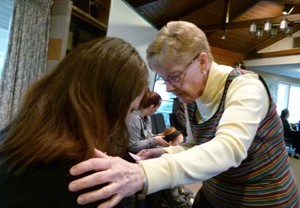 The retreat was funded by a grant from the Conrad Hilton Fund for Sisters as well as donations from individuals.

January is Human Trafficking Awareness Month. For more information on Trafficking visit stopenslavement.org or read “The Slave Across the Street” by Theresa Flores or “Stolen” by Katerina Rosenblatt.