In 1959, I was principal of the new Our Lady of Mount Carmel School in Louisville, KY.  At that time, schools could get maps and globes by redeeming Pepsi Cola bottle caps. (Remember when soda came in bottles?) I was also a Saturday student at Nazareth College (now Spalding University); and all the Dominican Sisters studying there would bring me little bags of bottle caps for the school. One Saturday, a handsome young man who was sweeping the floor offered to collect bottle caps from the Nazareth Pepsi machines for me. Every Saturday afterward he brought me a bag of bottle caps.

A few months later, I was reading a feature article in LIFE magazine about Cassius Clay, who had just won Gold in the 1960 Olympics. A photo showed him returning to Nazareth College to greet the Sisters of Charity of Nazareth, who had hired him as a part-time maintenance worker while he trained for the Olympics. “Well, that’s the young man who saved bottle caps for me!” I said.   Whenever I’d look at our new maps and globes, I’d think with delight about the Olympic Champion who’d helped us get them. 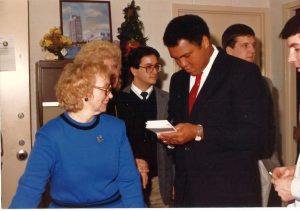 The photo shows Muhammad Ali visiting with me in 1988 at the University of Notre Dame, South Bend, Indiana. A staff member in the Educational Media Center at Notre Dame invited the Great Ali to surprise the Notre Dame students who were training for the Bengal Bouts, an annual fundraiser for the Holy Cross missions in Bangladesh. Ali was brought to meet me because of the story of the bottle caps. Of course, Ali did not remember, but he graciously kidded me about how old I must be if I had known him “back then. He already had Parkinson’s, but entertained us with a little performance where he pretended he could levitate off the ground. It was a great moment for us all to have “The Greatest” come to Educational Media. We shall all miss him. He died June 3, 2016.