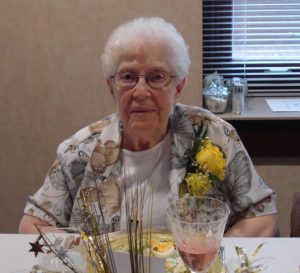 Dominican Sister of Peace Teresa Wolfe died August 7, 2016, at Sansbury Care Center, St. Catharine, KY just one week short of her 73rd year of religious profession. Teresa was professed in the former Kentucky Dominican Congregation. She was the only child of Tom and Winona Wolfe and is survived by several cousins.

Sr. Teresa earned a Bachelor of Arts degree in Education/English/Philosophy and a Masters degree in Education/English from Creighton University in Omaha, NE. She also earned certification as a Chaplain at the National Association of Catholic Chaplains from St. Joseph Hospital in Omaha. She ministered as a teacher and principal in schools in Nebraska, Illinois, and Iowa.

In l966, Sister Teresa became the Regional Coordinator of the Western Region. In l972, she became Associate Pastor of St. James Parish in Kearney, NE. Beginning in l977, Sister was the Associate Chaplain of Good Samaritan Hospital in Kearney where she later became the Director of Pastoral Care. In l993, Sister Teresa moved to St. Catharine Motherhouse, KY where she served as Assistant Coordinator at Sansbury Care Center. Her ministry as coordinator at Sansbury was enriching for both residents and employees. She exemplified and practiced interest and concern for each resident and was always open to address difficult issues. She also served Sister Paschala as proof reader of Signadou, History of the Kentucky Dominican Sisters. In 2014, she moved to Sansbury Care Center where she began a ministry of prayer and presence.

The Sisters of the Western Region remember her as always very present, never hurried, and always open to problems and concerns. Sister Teresa was seen by her principals as an excellent teacher with good rapport with her students. She was a direct, honest and practical woman as shown in her answer to someone’s comment, “You want me to be quiet!” Teresa answered simply, “Yes!” Her strong faith was evident when a friend said, “We’ve been friends a long time, Teresa.” Teresa’s reply was “It doesn’t have to end now.”

Sister Teresa was kind, patient, compassionate as well as positive and cheerful in her outlook. Her thoughtfulness was exemplified when she invited a sister in Omaha to bring her father and blind mother to Lincoln to play cards. She loved parties and was always open for a “Spite and Malice” card game with friends. Her leadership and love of people will be missed.

Sister Teresa’s wake and funeral were August 10 and 11 in the Sansbury Care Center Chapel. Burial followed in the St. Catharine Motherhouse cemetery.

Click here for a reflection from Sr. Teresa Wolfe’s funeral.