Dominican Sisters of Peace Address US Attacks on Syria 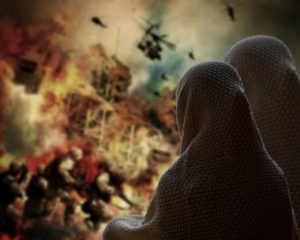 has issued this statement:

The Dominican Sisters of Peace strongly condemn the recent bombing in Syria by US and coalition forces.
We protest the immoral death and injury of innocent children and adults who have suffered from the effects of chemical weapons.
We urge diplomatic solutions to permanently end this conflict that strangles the people of Syria. The Syrian government demonstrates no concern for its own people and we call on the US government to do more to move President Assad to bring about a peaceful resolution to this war.

We ask that all Sisters, Associates and friends pray for a peaceful resolution for the people of Syria.

This morning as I stepped outside our backdoor to share some seeds with the birds, I was surprised by what I saw! Colorful life in an unexpected place.

Last fall, Cathy Arnold, OP had planted countless jonquil and tulip bulbs in our front garden, and we were anticipating a colorful outlay of yellows, reds, whites, etc. come spring. But when the tree fell on our house in early March, the clean-up and repair necessitated the entire garden and sidewalks be dug up to replace broken pipes.

Cathy had asked if the men could save any bulbs they came across in their digging if it wasn’t too much trouble. They pleasantly obliged, and placed what they found in a white bucket for later replanting.

So this morning, the sight of two bright jonquils and an unopened yellow bud rising out of the bucket of tossed together bulbs, caught my eye and took my breath away! A precious moment to simply pause, savor, and feel praise, joy, and gratitude well up in me, as I contemplated colorful life in this unexpected place. 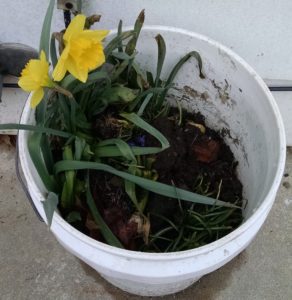 Last Friday in the Akron Beacon Journal, a commentary Congress achieves something big caught my eye–much like seeing life in an unexpected place. I guess I had pretty much given up on anything good or life-giving for the common good coming from our deadlocked bipartisan congress, so I read on and was happily surprised.

Many Americans despair that Republicans and Democrats seem incapable of coming together to do anything important.

Take heart–the two parties just did do something big together. Wednesday, (4.11) President Trump signed into law the Stop Enabling Sex Traffickers Act. A bill designed to crack down on websites that knowingly facilitate the online sex trafficking of vulnerable persons, including underage boys and girls.

And the FBI, informed by evidence collected during a nearly two-year bipartisan investigation by the Senate’s Permanent Subcommittee on Investigations, just seized the website Backpage.com—which the Center for Missing and Exploited Children says is responsible for 73 percent of the 10,000 child sex trafficking reports it receives each year—and arrested seven of its top executives.

Hurray! Life continues to show up in unexpected places!

This Easter Season is especially dedicated to celebrating the Resurrection of Jesus. And the many stories of Mary Magdalene and the apostles meeting or discovering Christ and New Life among and within them—prepare our hearts to seek and find God in unexpected ways and places.

Jesus said, “I am the Way, the Truth, and the Life.” How and where have you discovered LIFE in ways/places you didn’t expect?

The daily news cycle keeps us constantly aware of each day’s escalating violence.  A few days after celebrating Easter Sunday, I remember hearing news of the most recent chemical gassing of Syrian citizens, women, men and children, by its own government.  As I prayed for peace that day in the safety of my home halfway around the world, I could not help wondering how the Christian Syrians were coping during the commemoration of the holiest events of the Christian faith, in the midst of such suffering.

During my prayer, I thought also about the victims and the loved ones of those killed by gun violence around the world and the myriad ways humanity has found to inflict suffering upon one another.  Pope Francis spoke to the world in his Easter Message of many of these areas of global suffering. His message called for peace and reconciliation in a world “torn by war and conflict and marked by so many acts of injustice and violence.”

Recently I participated in an Easter Novena for Peace. It was an excellent way to really remember the Resurrection gifts of hope and peace.  I know that achieving true peace requires both prayer and action, but I believe it is God’s gift of hope through the Resurrection that brings lasting peace—“the peace beyond all understanding”–despite the circumstances.

“Peace Be With You.”  These were the first words that Jesus proclaimed when he appeared to his frightened friends who had just days before witnessed the horrors of his execution and death. Yet, here Jesus stands before them speaking of “peace” and sharing with them the Spirit that would empower them with hope. Is this not Easter hope, a gift of the Resurrection, still being offered by Jesus to each of us today?  I believe it is.  It is this Resurrection hope that enables Christians to proclaim “Happy Easter” even in a world, “torn by war and conflict and marked by so many acts of injustice and violence.”

Sr. Irene had a great love of learning and study. She earned a Bachelor of Arts in Social Studies/Sociology from the College of St. Rose and her Master of Theological Studies from the Franciscan School of Theology. She expanded her knowledge by studying other disciples at numerous institutes and workshops, including the Dominican School of Spirituality and the Catholic University of America.

Much of Sr. Irene’s active ministry was spent serving the spiritual needs of others as a DRE, Pastoral Minister, and as a staff member at retreats in Pennsylvania, New York, Florida, Michigan and New Mexico. She also served on the Leadership team of her founding congregation for 10 years. She was a lover of history, and a great admirer of Lucy Eaton Smith, the founder of the de Ricci congregation.

In her preaching for Sr. Irene’s service, Sr. Anne Lythgoe remembered her ability to be present, to engage with a single person. Perhaps this was part of her gift to her spiritual ministry. Even after she became ill, she took great pleasure in the company of her friends and her community.

Sr. Irene is preceded in death by her parents, her brother, Louis and her sisters, Angela Vidinsky, and Rosemary DeSanto.  She is survived by her brother, Lawrence, her sister Lucy Rankin and nieces and nephews.

or submitted securely at www.oppeace.org.

He left the tomb empty, and no note of explanation. Mary of Magdala, recognizing him, reached out—and he would not let her touch him. “Go. Tell. ” he said to her, and he was gone. Other post-resurrection appearances were similar. He appeared, had a brief and potent exchange with them, then disappeared. The couple traveling to Emmaus talked at length with him, but did not recognize him till they broke bread with him, whereupon he vanished. He appeared at least twice to those who gathered behind locked doors, and made breakfast for them as they fished. And he vanished. He sent them out to preach the Gospel, and with a promise to be with them until the end of time, vanished.

Our ritual celebration of Easter is tangible and rich, the Divine Mystery so present in sign and symbol. The whole Triduum is suffused with a deep sense of presence—ours to Christ, Christ to us, that mystery of extraordinary love and selflessness, renewed again. The igniting of the New Fire, the lighting of the Paschal candle, the tapers spreading flames, the chapel gradually coming to full glow. And then, the  Exultet: “ Rejoice heavenly choirs! Rejoice O earth in shining splendor, radiant in the brightness of your king! Christ has conquered, glory fills you!”  Our assembly resounds with joy. We celebrate and go forth awash in glory, a newly created Easter People.  Jesus Christ is risen today, alleluia!

Departing , we have to pull on winter coats. Yes. It’s Northern Ohio. We walk out into an April snow, on  ground hard and frosted, the green blades struggling to rise, their blooming deferred again. The immediate chill of contrast: the brightness of the ritual versus the dark and cold.  And before I’m home, there’s already doubt. The stubborn winter is everywhere, I think. It’s been centuries, and we’re still lost in pain and fear and hatred. Tomorrow’s paper will feature an Easter greeting, an illustration on the front page, perhaps, but the rest will be the usual, or worse—wars, starvation, refugees, the misery we humans inflict on each other.

I admit it—the joy and hope of Christ’s Resurrection in me can slip so quickly. Like the couple on the road to Emmaus, I ask Jesus Risen “Are you the only one around here who hasn’t heard the endless bad news? How our world anguishes, groans, her people still enslaved in darkness? We had hoped there would be brighter light and love by now, that your resurrection would transform the face of the earth. Is it, are You, True?”

Jesus patiently explains to me, again, the Easter truth: vanishing does not mean withdrawal or abandonment. His Rising is a vast explosion, sending shards of his shining presence into all creation, expanding the Incarnation—the precious entanglement of humanity and God– far beyond any human hope or dream can reach; setting the Spirit free to keep the promise alive, to ignite and unite and delight us, “Eastering” in and through us, making music out of our groaning, and dancing out of our stumbling. Our very human doubting and believing are, in the Spirit’s power, both elements of  transformation—of us and of all creation.  We sang it. “Love is/will come again, like wheat arising green.”  Or the plucky daffodils of Northern Ohio. Do I hear an “Alleluia?”