Resistance or Restlessness in Prayer

What happens when we feel unsettled or resistant during prayer?

This question is one of the common questions that a retreat director asks a retreatant. One day, I brought this topic to my community as a spontaneous topic for conversation around the table during dinner time. Here is some of what we shared:

We began to list our potential or common causes of resistance or restlessness during prayer based on our own experiences or from other people’s experiences:

How about your prayer? Do you have any resistance or any restless moments in your prayer that you have experienced recently?  Have you paid attention to the underlying reason why these resistances and restlessness show up in your prayer? What do these experiences tell you?  Is it possible that you are resisting God calling you to discern your vocation to religious life?

God Calling??  Come and visit us. Check out our Vocations Facebook page, or one of our other discernment opportunities, including our Come and See Weekend Retreat (September 13-15 at St. Catharine, Kentucky), monthly Emmaus Discernment group (at our Motherhouse in Columbus or on-line–coming back this August), and more. Contact us for more information.

On January 1, 1863, Abraham Lincoln issued the Emancipation Proclamation which declared freedom for all slaves in the United States. On June 19, 1865, this great news finally made its way to the Black men and women being kept as slaves in the great state of Texas. Two years after the proclamation? We know news traveled slowly in those days, but did it really take two years? Yes, it did.

Was the messenger murdered on the way? Was the news deliberately withheld by the slave owners to maintain the labor force? Did the federal troops actually wait for the slave owners to reap the benefits of the last cotton harvest before they spread the news? History has not recorded why the delay, but a delay there was.

So June 19 has become known as the date for the oldest known celebration of the end of slavery. It is known as Juneteenth, and it is a day when people come together to pray for peace and liberty for all; a day when we can all take one step closer together, to better use the energy that many of us waste on racism.

From Africa’s hurt we rose, already a people, our faces ebon, our bodies lean,

Skills of art, beauty and family,

Crushed by forces we knew nothing of, we rose.

Survive we must; we did.

Above everything expected, we rose

To become the knowledge we never knew.

Dream we did. Act we must.

Don’t forget to cast your vote for or against the Corporate Stance to Abolish the Death Penalty.  The deadline is June 26 and you can vote for the stance either by paper or on line.  Here is the link for on line voting.  The ballot is attached here.  If you use the paper ballot, please send it to Ms. Crystal Henderson, 2320 Airport Drive, Columbus, Ohio 43219. It must be postmarked by June 26.

This Thursday, June 20th,  is World Refugee Day. There are several things you can do to help them.

You share the journey
with migrants and refugees,
lightening their footsteps with hope.
For you, Lord, are close
to the broken-hearted.

Pour out your Spirit
upon world leaders.
May they see the tragedies
of our human family,
and be moved to respond with
wisdom, compassion and courage.

Open our eyes and hearts
to the God-given dignity
of all your people.
Move us to welcome our neighbors,
and so bear witness to your love.
Through Christ our Lord, Amen.

The U.S.’s 1500th execution.  This year, the United States is scheduled to mark a troubling and shameful milestone: it is the 1500th prisoner execution since Gary Gilmore was the 1st person executed in 1977. On June 20 at 7:00 pm EDT, the state of Georgia is scheduled to execute Marion Wilson, Jr. for the murder of Donovan Corey Parks.  If carried out, this will be execution #1500.

Microplastics are everywhere including in the food you eat. Read more about this problem in this article from National Public Radio.

Global climate change is impacting people and the environment in many ways. The Sisters of Mercy have laid this out in an excellent chart. How does it impact our chapter commitments?

A new exhibit, Nuns Healing Hearts Photo Exhibit, has opened in the Vatican.  The exhibit is a collection of photographs taken throughout the past year by Lisa Kristine, a photographer who has photographed many who have been affected by human trafficking.  The exhibit will be in New York at the United Nations on Monday, July 29 and Tuesday, July 30. If you can’t get there in person, check out this virtual tour. The Nuns Healing Hearts campaign was launched on May 10, 2019 by Pope Francis. It marks the 10th anniversary of Talitha Kum, the international network of Catholic Sisters dedicated to ending the practice of human trafficking and exploitation around the world.

Why isn’t the church and its members standing up for gun safety?   National Catholic Reporter explores this in the article, “US gun ‘idolatry’ demands more prophetic church stand, some Catholics say.”  The notion of sacrifice has been on the mind of Susan Bigelow Reynolds a lot recently. After the Colorado shooting in May, her social media feeds were full of posts — including from fellow Catholics — with Bible quotes celebrating the student who was killed tackling the gunman. In those posts, she’s starting to see a disturbing, dangerous and distracting narrative around the idea of “sacrificial love.” “That kind of selflessness should move us, obviously, but on a deeper level it should horrify us,” Reynolds said. “Our lawmakers have left our children for dead, right? They’ve left them to fend for themselves. I can think of no more thorough failure of moral leadership really than what we’re witnessing right now.”

Congratulations to Marriott Hotels who are implementing mandatory training for all employees to recognize signs of human trafficking. Over 500,000 employees are being trained.

This Thursday, June 20th is World Refugee Day, a day to commemorate the strength, courage, and perseverance of millions of refugees like Natalie. Born and raised in a small village in Ghana, Natalia’s family was struggling to pay the school fees for her education and welcomed the opportunity for Natalia to receive an education in the U.S.

Shortly after arriving, the father she was living with began to physically and sexually abuse her. For the next six years, she was forced to clean the house, wash clothes, cook, and care for their three children, often working 18 hours a day while receiving no form of payment.  She was never allowed to enroll in school as the family had promised, to go outside, or even use the phone.

One day, after she was severely beaten, Natalia saw an opportunity to run away and a neighbor called the police.  She was then taken to a local hospital for medical. The nurse assisting Natalia was aware of the National Human Trafficking Resource Center and referred her to Polaris New Jersey, an organization that works to combat and prevent human trafficking.

We have heard of the many reasons why men and women seek to flee their country of origin and go to another country – poverty, climate disasters, gang, and domestic violence, war.  It’s often hard for white Americans to understand this phenomenon and yet the vast majority of us have immigrant or refugee ancestors.

The United States has admitted, if not always welcomed, refugees from its beginnings. Refugees resettled here to rebuild their lives and contribute meaningfully to local economies. The U.S. Refugee Admissions Program is a model humanitarian program and critical tool of U.S. foreign policy.  Unfortunately, the number of refugees admitted each year has been reduced from an average of 95,000 to fewer than 30,000. There are two pro-refugee bills recently introduced in both the House of Representatives and the Senate.

H.R. 2146 and S. 1088. The GRACE Act (Guaranteed Refugee Admissions Ceiling Enhancement Act) would set a minimum on refugee admissions of 95,000 each fiscal year.

H.R. 2214 and S. 1123. The NO BAN Act (National Origin Based Antidiscrimination for Nonimmigrants Act) would repeal the executive orders that have halted refugee admissions, banned individuals from Muslim-majority countries and barred individuals from seeking asylum between ports of entry. It would also strengthen the Immigration and Nationality Act to prohibit religious discrimination.

Sadly, as the number of legal refugees is reduced, more individuals are forced to look for illegal means that put them at greater risk of forced labor and human trafficking.  New immigrants may be susceptible to trafficking because of their precarious social and economic circumstances. Like Natalia above, they are pushed into the shadows allowing traffickers to use people’s immigration status as a tool to exploit their labor or coerce them into participating in the sex trade. More and more resources are being diminished or reduced undercutting anti-trafficking efforts and feeding into the hands of those who seek to exploit migrants and refugees.  It’s time to push for more just treatment of our brothers and sisters. 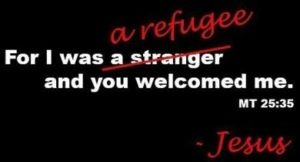 I did something this weekend that I really didn’t want to do.

I watched the Ava DuVernay-directed When They See Us, the four-part mini-series streaming on Netflix that tells the story of the Exonerated Five.

I hesitated to view it because I knew it was going to be difficult to watch. I knew it would trigger the trauma of strategic and systemic racism – a system that devalues black and brown lives (meaning it would take me on a very rough emotional roller coaster ride).

I knew the story and its outcome: five black and Hispanic teens (ages 14 to 16), labeled the Central Park Five, were arrested, interrogated, tried and convicted of brutally raping a 28-year-old white female jogger, despite the fact that DNA evidence wasn’t a match for any of them. Twelve years later (when all but two of the five were out of prison), a convicted rapist and murderer (whose DNA was a match) confessed to the crime.  The five were exonerated and eventually received a $41 million settlement and have found life after incarceration.

But I convinced myself to watch it – even though I knew it would cause me to be an emotional wreck –because I knew it was an opportunity to hear the story from the perspective of the five – all now men in their 40s.

I made the decision after reading articles and seeing interviews of the five and experiencing their words describing the mini-series as a way to convey their “truth”; as a “sacrifice” to change the culture by becoming engaged; as a “platform” to start the conversation to prevent another Central Park Five; as a means to “effect change”; as a vehicle for telling their stories.

It became very clear to me that these men wanted and needed to be heard. I was compelled to oblige, knowing that my discomfort couldn’t possibly compare to their lived pain and trauma. So, I braced myself – still, their pain and trauma were transferable. I fully understand why a grief counselor was on the set while filming.

Ava DuVernay has said her goal in directing the series was “to humanize boys, now men, who are widely regarded as criminals” and “to invite the audience to re-interrogate everyone that they define as a criminal … I’m asking the question to everyone, ‘What do you see when you see black boys’?”

When They See Us is the Exonerated Five telling their story. And as painful as it is to hear, I think they should be heard. They paid a terrible price, and I think we owe it to them to listen.

I hope you accept Ava DuVernay’s invitation to question who you define as a criminal and to answer the question: What do you see when you see black and brown boys?