NIMBY (Not In My Back Yard)

“All communities and persons across the nation should live in a safe and healthy environment…To the greatest extent practical and permitted by law…each federal agency shall make achieving environmental justice part of its mission by identifying and addressing as appropriate, disproportionately high and adverse human health or environmental efforts programs, policies and activities on minority populations and low-income populations in the United States.”

How do climate change, COVID-19 and racism come together?  Cities around the country are asking that question.  If we eliminate COVID-19 from consideration, we find that in cities with large numbers of African Americans and Hispanic, those people of color live in highly polluted areas of those cities.

In west Louisville, the American Synthetic Rubber Company exceeded legal emissions of a particular toxic chemical, which increased the risk of cancer, heart disease, and respiratory illness for disadvantaged communities with a large African American population.  Over the three-year period of 2017-2019, the company put nearly 4,000 pounds of 1,3-butadiene, a chemical compound used in making synthetic rubber that is associated with an increased incidence of leukemia. The company lost the resulting lawsuit and was forced to pay $135,375 to the city of Louisville. 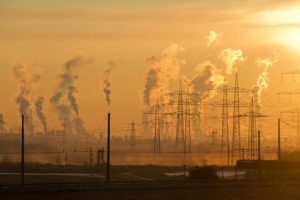 Given that 80% of this toxic air pollution was released to west Louisville, often called “Rubbertown,” how will this support the citizens who were directly affected when the money was paid to the Air Pollution Control District of Louisville?

Systemic racism has enabled industries with toxic chemicals to locate in areas of cities with a predominance of people of color.  Cities in need of financial support court and incentivize these industries and often ignore environmental regulation, so methane-producing power plants are allowed to become part of the landscape, and methane part of the air that citizens breathe.

Neighborhoods near industries such as these are twice as likely to have either asthma or high blood pressure and four times as likely to have COPD.  Those living in an industrial area have higher rates of miscarriages, dementia, and lower birth rates.  Lower-income African Americans and Hispanic Americans have fewer choices in housing. Remember redlining?

Environmental racism is inseparable from racial segregation, which is itself a result of individual and systemic racism, including public policy at every level of government.  For industry, non-white neighborhoods are cheaper to acquire.

Toxic air, water and soil are a fact of life in cities around the country.  In the last few years, weakened environmental laws have worsened the reality.  Many African American and Hispanic citizens find themselves in segregated neighborhoods, often located near plants expelling highly toxic chemicals.  This reality, coupled with high instances of heart, kidney and respiratory illness make African Americans a prime target of COVID-19.

In an era of multiple crises, we now face multiple layers of discrimination.  One solution available to us is to hold those in power accountable – VOTE!

Protest the Death Penalty
Earlier this week, the US Supreme Court failed to act with mercy, which may mean the first federal

Please click here to find actions that you might take to protest these executions, including petitions, witness opportunities, and more.

The 27th Annual Fast & Vigil to Abolish the Death Penalty at the US Supreme Court is well under way. ALL PROGRAMS ARE BEING STREAMED LIVE on the Starvin’ for Justice Facebook Page at 11am, 1:30pm, 4pm and 7pm today and Thursday.

You do not need a Facebook account to watch, or to see the archive of programs already completed. The full schedule is here. Please note that the opening and closing events require registration, which is here.

Monsanto Pays Up
Bayer, following its 2018 acquisition of Monsanto, will pay up to $10.9 billion to settle nearly 100,000 individual lawsuits alleging that exposure to the glyphosate-based herbicide Roundup causes cancer.

This $10.9 billion settlement is yet another landmark moment that signals a turning tide against agrichemical giants like Bayer. For decades, Monsanto assured farmers, farmworkers, pesticide applicators, and homeowners that glyphosate was harmless, even with prolonged exposure. For too long, mega-corporations have profited from toxic pesticides, obscured the risks associated with them, and avoided taking responsibility for the damages they have caused. Following the three previous verdicts, Bayer sees the writing on the wall and is seeking to mitigate its losses by settling and paying up now.

No More Genetically-Engineered Seeds!
For years now, pesticide industry giants have been peddling their genetically engineered (GE) technology kits: modified seeds and the herbicides that go with them. Clear evidence shows this system is dangerous, brittle and failing, yet these corporations are now doubling down. Right now, the US Department of Agriculture (USDA) is considering a request from Monsanto (recently acquired by Bayer) to approve a new GE corn seed engineered for use with five different herbicides.

The “creation” of a corn seed that can survive five different herbicides is likely to increase the use of those herbicides, putting the environment and wildlife in those areas at risk.

Click here to tell the USDA to prevent Monsanto’s use of genetically-engineered corn seeds.