As we continue to celebrate the lives of women who have made a difference in our country during Women’s History Month, I applaud Lilly Ledbetter as one who has made a substantial contribution in improving the lives of women.

In 1979, she took a job as an overnight supervisor with Goodyear Tire and Rubber in Gadsden, Alabama.  By the end of her career, she was earning less than any of the men in the same position.  She filed a complaint with the Equal Employment Opportunity Commission and later initiated a lawsuit and, as a result, she was reassigned to duties such as lifting heavy tires.  Although she won the lawsuit, the Supreme Court overturned the decision.  The Lilly Ledbetter Act was signed into law by President Obama in 2009.

Still, women working full time year-round earn on average 80 cents for every dollar earned by men.  According to the Center for American Progress research suggests that women lose more than $400,000 over a 40-year career due to the wage gap.  For Black women and Latinas these lifetime losses can equal $946,120 and $1,135,440 respectively.

COVID 19 has exacerbated the problem of wage inequity.  According to FORTUNE nearly 80% of the 346,000 workers who lost their jobs in January 2021 were women.  More than 2.3 million women have now left the labor force in less than a year.  Most do not have the option of working from home.  With schools closed across the country, single mothers are often forced to stay home as the caregiver, and nearly half of the working women are in low wage jobs.  COVID has turned the spotlight on the dire situation low-income mothers face, especially with school closings and the high cost of childcare.  Salaries do not match the cost of the crisis. 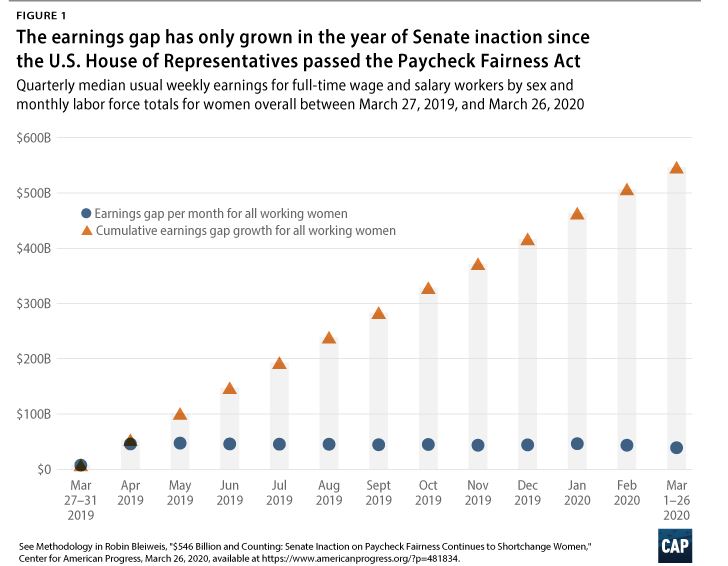 It has been one year since the U.S. House of Representatives passed the Paycheck Fairness Act (H.R.7).  That bill, along with 400 others, rested on the desk of then Majority Leader McConnell’s desk, sometimes referred to as the “Senate graveyard.”  That was then.  What do we do now?

Many politicians state that they support equal pay for equal work, but their words have not translated into action.

What will the Paycheck Fairness Act do?  There are four main features: