And almost as usual, life began to unfold in the parish early on that Sunday morning.

Our schedules in hand, we, the clergy began to enter into our last-minute preparations for the Masses over which we would preside on that Sunday morning.

The early Mass folk were already beginning to arrive at that modest-sized, Westside, mostly Polish parish.

It was beginning as just another Sunday.

Or so most of us thought.

But that morning there was one difference.

There was a police car outside, directly front of the front entrance to the church. And a couple of the occupants were asking to speak to the clergy.

Alone . . .  apart from the gathering crowd . . .  somewhere somewhat isolated so that what was about to be said would be spoken in a degree of secrecy.

At least for the moment.

Clergy gathered (and remember, this was 1967 and many parishes back then had more than a single priest!) and the officers spoke to us.

No need for alarm and certainly there is no need to alarm the congregation. However, there is some “trouble” in the streets somewhat nearby. Because of that, keep things as brief as possible and simply, calmly at the end of the Mass encourage everyone to go directly home. Tell them not to linger, socialize or head out anywhere for breakfast.

Some “trouble” in the streets somewhat nearby!

July 24 is the anniversary day of the founding, the establishment of Detroit. 1701 was the day. And here it was – another July 24 only this year, 1967, Detroit was taking a different turn in its identity.

Late night or early morning, depending on your sense of time, something had happened that set tempers flaring and unleashed long pent-up frustrations.

And there was violence in the streets.

Some ‘trouble” somewhat nearby!

Masses went on as usual and as scheduled. Folks were encouraged to not linger but rather head straight home. As the morning progressed, folks arriving were hearing something of the news of that “trouble” somewhat nearby.

And a bit later that Sunday, I had the opportunity of hosting a gathering of a handful of faculty and students from the University of Detroit. At that time I was a student in the graduate program there, taking courses in education and counseling. Our gathering consisted of some like minds, folks who could name trends and issues impacting society and analyze and speculate possible results.

One of the items that came up was the current condition of Detroit’s black population. Several of the faculty spoke about how surprised they were that something had not yet erupted, given the prevalence of racism and its effects.

The discussion continued along those lines on into the evening.

The time came for my guests to depart. The sky was darkening. Night was descending.

And as we emerged from our gathering in that rectory, we could see something more.

Flames were tearing through that darkness.

Somewhere not too distant from where we were, neighborhoods were ablaze. 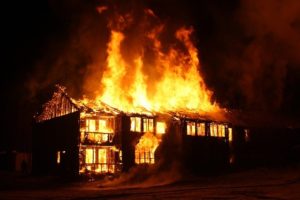 A people had been dehumanized for far too long.

Now much pent-up anger was emerging, erupting, tearing through the streets.

Langston Hughes captured it so very, very well. “What happens to a dream deferred? Does it dry up Like a raisin in the sun?… Or does it explode?”

Every human being has a dream, a God-given dream and that is to be treated as, respected as a human being, made in the image and likeness of God.

And when that dream is deferred . . . it does not dry up like some raisin in the sun.